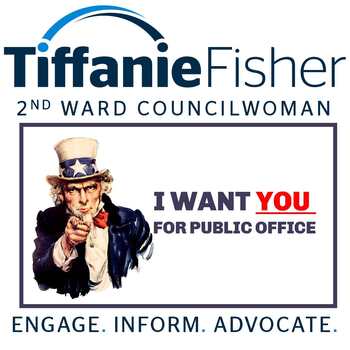 Dear friends and neighbors,
Have you ever thought about running for local office?  In case you didn’t realize, we have an election coming up in November for Mayor and three At Large City Council seats.  As of this writing, it looks like Mayor Bhalla and his slate of three City Council candidates including just one incumbent will run unopposed.  Elections with only one candidate for each office are not very democratic.  #MoreChoicesAreBetter
See more below, but I will put this upfront while I have your attention.
With two of the three City Council seats having no incumbent running there is a real opportunity to have more independent voices on the City Council to ensure that our local government will serve the best interests of our community.
The math of the City Council is as follows.  Out of 9 possible votes (3 At Large, 6 Ward seats):
The mayor will tell you that he needs 5 votes or he can't get anything done which is 100% not true.  He needs 5 votes to freely pass 100% of his agenda with no pushback.  But he has 9 votes on all of his good policies and legislation he puts forward.  He will not be able to point to any good legislation in his last 3.5 years that did not have the full support of the City Council.  Myself included.  So the "can't get anything done" excuse is only when he puts up bad policies.
Second ward residents elected me to be an independent voice on the City Council.  Independent does not mean anti-mayor.  It means supporting all good government legislation and actions but not afraid to push back on bad legislation and actions.  Which you know I am not afraid to do.  What this translates to is voting 9-0 on about 90+% of what the mayor puts before the City Council.  It is the remaining <10% where the issues require a robust discussion and sometimes are voted against or amended to be made better for you.  Even if you love the mayor, I hope you recognize that fealty and lack of debate are not good for democracy.
As a reminder of what a City Council would have looked like without independent voices....

So I will ask again…
Or just let me know if you think having more independent voices is a good thing for our government.
The process to run for City Council involves getting ballot petitions signed before 8/30 at 4pm and I know several people who will help, myself included.  I can tell you that in my experience of getting over 1,000 ballot petitions signed, people, when asked, want to support democracy and support candidates who put their hand up to run.  It is not a heavy lift.  Even if people like the status quo, the fundamental support for democracy and choices prevail.

As always, please forward to anyone you think may be interested in receiving this.  Feel free to email me at councilwomanfisher2@gmail.com or call me at 201-208-1674 to discuss what you have read or anything else that is important to you.