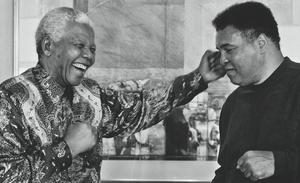 The human rights and Palestine solidarity organisation BDS South Africa joins the peace-loving peoples of the world in mourning the loss and celebrating the life of boxing legend and activist, Muhammad Ali.

Ali is an inspiration for those us fighting for justice - be it in the struggle against racial injustice, economic exploitation or Israeli Apartheid.

According to news reports, in 1974 already, the former boxing champion told a press conference in Beirut, that “the United States is the stronghold of Zionism and imperialism.” On a later visit to two Palestinian refugee camps Muhammad Ali is quoted as saying: “I declare support for the Palestinian struggle to liberate their homeland."
In 1985 the heavyweight boxer travelled to Israel in an attempt to secure the release of Lebanese and Palestinian prisoners held by the Israeli regime.
Ali’s determination and commitment to civil rights, anti-imperialism and social justice motivated many of our people (and our international allies) in the anti-apartheid movement. Today Ali inspires many Palestinian solidarity activists in the struggle and boycott of Israeli Apartheid.