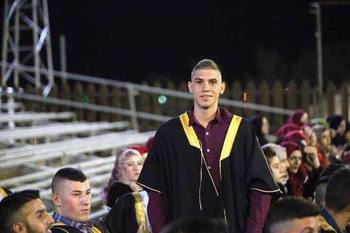 Muhammad Khalaf, who recently matriculated from school, was among those killed by Israel
22 July 2017 | https://tinyurl.com/yc44jsm6
Yesterday Israel killed three Palestinian youth - Muhamd Mahmoud Sahraf (18), Muhamad Mahmoud Khalaf (17) and Muhamad Hasan Abu Ghanam (20). From South Africa, we send our sincere condolences and strength to the families of the deceased.
Palestinians had to bury their dead within a very short space of time in order to prevent Israel from confiscating the corpses. In a video posted online, the body of Muhamad Ghanam can be seen being hurled over a wall to prevent Israeli forces from seizing the corpse (click here). Israel has cruelly embarked on the practice of withholding the bodies of dead Palestinians as a form of collective punishment and (similar to the Apartheid SA regime) in an attempt to prevent mass funerals (click here). If bodies are returned to their families its usually on condition that funerals are “small, quiet, and at night”. Israeli human rights organization Btselem has said that: “not only is this policy patently immoral, it is yet another instance of Israeli authorities’ disregard for the lives of Palestinians – even after their death.” (click here)
In a related incident from yesterday, captured on video, an Israeli solider is seen kicking a Palestinian man who is praying (click here). In addition, Israeli forces also stormed a hospital beating up doctors and other medical personnel. The hospital has called on international organisations to intervene after armed Israeli officers began manning the corridors inside the medical facility and checking the ID cards of anyone who looked Palestinian. In a statement, the Al-Makassad hospital called on the Red Cross and the World Health Organization “to intervene quickly and immediately and put an end to the chaos caused by the raids carried out by the Israeli occupation forces inside the Hospital’s grounds and premises.” (click here)
The Palestinian youth who were killed yesterday were part of Palestinian non-violent prayers and demonstrations that took place across Jerusalem and the West Bank in protest against recent increased restrictions by Israel on Palestinian freedom of movement and religion, particularly in East Jerusalem and at the Al Aqsa mosque. Israel is illegally occupying and controlling East Jerusalem with Israel's domination of Palestinian holy sites in East Jerusalem, both Christian and Muslim, being in violation of international law.
During Easter, Israel routinely obstructs Palestinian Christians from praying at the Holy Sepulcher in East Jerusalem (click here for 2013, click here for 2014, click here for 2015, click here for 2016, click here for 2017). This week Israel obstructed Palestinian Muslims from accessing the Al-Aqsa mosque in East Jerusalem by imposing new so called security measures and barring Palestinian men under the age of 50 from the holy site. These among other Israeli restrictions have led to the recent Aqsa protests (click here).

Christian leaders of Palestine have issued a statement in solidarity: "We, the Heads of Churches in Jerusalem, express our serious concern regarding the recent escalation in violent developments...we are worried about any change to historical situation in Al-Aqsa Mosque and its courtyyard, and in the holy city of Jerusalem" (click here). In addition, yesterday, during the Friday prayers, Palestinian Muslims were united with fellow Palestinian Christians in the protest actions (click here for a video of a Palestinian Christian reading the bible in solidarity with his Muslim counterparts who were performing the Friday prayer).
----------*----------
As South Africans, witnessing the non-violent demonstrations by the indigenous Palestinians against Israel's occupation and oppression, we are painfully reminded of the protests by our own youth during the 1970s against Apartheid South Africa.
Similarly to Israel, Apartheid South Africa also restricted our freedom of movement and religion and, in addition, also resorted to invading and attempting to control our houses of worship as soon as these became bastions of our liberation struggle such as Regina Mundi Church, St George's Cathedral, St Athens Road Mosque etc.
Israel tries to suggest that this is a religious conflict, and some fanatical Israelis believe it to be such, but in essence, like our own struggle, even though there were some fanatical religious Afrikaaners, this is primarily an issue of an indigenous people demanding equality and freedom from an occupying power.
We are confident that the Palestinians, together with their progressive Jewish Israeli allies, will achieve their freedom from Israeli oppression, apartheid and occupation. Like South Africans, the Palestinians too have the right to resist and protest as well as the right to live free of occupation and apartheid (click here for an article by Jewish lawyer Stanely Cohen). Until then, we take heed of Nelson Mandela’s words that "we know too well that our freedom is incomplete without the freedom of the Palestinians". In support of Palestinian freedom we, together with other South Africans, commit to intensify BDS boycott of Israel campaigns and actions as concrete and practical ways to hold Israel accountable for their violations of international law.
To the Palestinians and their progressive Jewish Israeli allies fighting for a just peace for all who live in that land, we say, you too will attain your freedom!
There will be a rally hosted in Johannesburg by the Palestine Solidarity Alliance among other organizations on Wednesday 26 July at 19h30 in protest against the recent Israeli restrictions on freedom of movement and religion. Guest speakers include visiting Palestinian youth activists Ahed Tamimi and Janna Jihad.
ISSUED BY KWARA KEKANA ON BEHALF OF BDS SOUTH AFRICA