NEVER A BOY
AT UCB HELL'S KITCHEN
Aug 5 and Aug 22
They said she was a boy, but she wasn't. 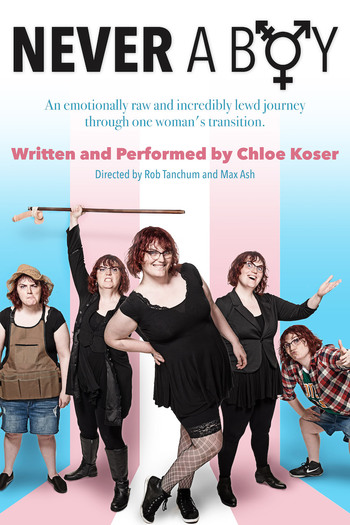 (Download Hi-Res poster)
WHAT: NEVER A BOY - Chloe Koser invites you into her life as a trans comedian in a one-woman show that is equal parts emotionally raw and incredibly lewd. There's boners, a whale, tampons, semen, and Chloe crying at least once in every performance. CONTENT WARNING: Gender Dysphoria, Bottom Dysphoria, Fertility Dysphoria, Suicidal Ideation.
WHEN:
Monday, August 5, 9pm
Thursday, August 22, 9pm
(additional dates TBA)
WHERE: UCB Hell's Kitchen - 555 W 42nd Street, New York, NY 10036
HOW: $9. Purchase tickets here: https://hellskitchen.ucbtheatre.com/show/7262
MORE ABOUT NEVER A BOY: Lewd, soul-baring, and hilarious: Chloe Koser (UCB Theater) welcomes you into her life as a trans comedian via outrageous characters and intimate storytelling. Personal, gross, silly, sad, and joyous, NEVER A BOY provides an intimate look into the challenges of coming out as a woman. Between soul-baring confessionals, NEVER A BOY unveils Chloe’s new medley of jaw-dropping characters: including a boner-obsessed business woman, a lesbian pick-up artist, a grizzled tampon maker, and a woman who will stop at nothing to fuck a whale. NEVER A BOY is written by and stars Chloe Koser, and is directed by Max Ash and Rob Tanchum.
ABOUT CHLOE KOSER: Chloe Koser (she/her) is a lady, queer, and trans. She was an actress on UCBT's Maude Night for three years, and performs in a number of UCBT shows, including The Spotlight: Starring Chloe Koser, The Queerball Sketch Show, Shady: A Queer Character Showcase, and the UCB Sketch Showcase. Her one-woman show, NEVER A BOY, is currently showing twice a month at UCBT Hell's Kitchen. (chloekoser.com)
ABOUT MAX ASH: Max Ash is a writer/actor/comedian living in New York City. He developed his sketch comedy chops writing and performing with Hammerkatz, NYU's premiere sketch comedy group which was fun. He writes and performs in SHIZ: Broadway Meets Sketch Comedy, and writes for UCB's Maude team "Attention Shoppers". Ash previously wrote for Maude teams "Dangerous Woman," "Hot Bird" and "Archnemesis". Doing things with all of these groups is/was equally fun. With Rob Tanchum, he enjoyed a run of the two-person show BEENG BOONG: The Great And Powerful MTA which was about the NYC Subway System and it was really fun. Thank you.
ABOUT ROB TANCHUM: Rob is a comedian/rapper/writer living in an apartment. He graduated from NYU with a BA in Film & TV Production, despite spending most of his collegiate energy writing and performing sketch comedy as a member and director of HammerkatzNYU. More recently Rob was a writer for the UCB house sketch team Nipsey and cowrote and performed in BEENG BOONG: The Great & Powerful MTA, which ran at the UCB for 6 months. His other work can be seen at comedy theaters around NYC and on his laptop in various folders. Recent directing credits include UCB Maude Night teams "Choir" and "Archnemesis". Rob recently released Disturbed, Depressed, Inadequate - a comedy rap album Executive Produced by Dan Harmon and Starburns Industries.
###
For all media requests, contact Andrew Gerhan - andrew@sharkpartymedia.com