As our way of saying a million Thanks to our good musical brothers and sisters
worldwide, we are offering a special "KILLER GROOVEYARD XMAS IN JULY 2011
SUPER 6 PACK SWEET DEAL" of 6 discs for $50 (USD) for a Limited time only.
(Includes FREE shipping - All non-US orders will ship Air Mail without the jewel cases)
This "Sweet Deal" only applies to 6 discs of your choice from the following list of
discs in this e-mail newsletter and is only available for a limited time. This offer is
available now and expires Tuesday (7.5.11). No other discs from the Grooveyard
Site/Catalog that aren't in this e-mail newsletter will be available for this special deal.
You can easily place your order through our site (See Link/Info Below).

If you "missed the boat" on any of these killer heavy guitar discs, now is the time
to tune in.  Our discs make perfect musical gifts for yourself and for your loved
ones who heavily dig and know what time of day it is when it comes down to REAL
guitar music. These discs are CHEAPER than MP3 downloads, so treat yourself
to the best guitar music out there in Guitar Land direct from the Grooveyard.
SUMMER 2011 IS HERE AND IT'S TIME TO ROCK GUITAR HEAVY WITH THE GROOVEYARD!!!
KICK OUT THE JAMS AND WAVE YOUR HEAVY GUITAR FREAK FLAGS HIGH!!!

(((AWESOME SWEET DEAL GROOVEYARD DISCS THAT WILL TRIP YOUR BRAIN)))

45. ROB LAMOTHE: "Above The Wing Is Heaven" (SGR043)
(Remarkable, deep, bluesy/soulful, laid-back acoustic
grooves from the gifted ex-Riverdogs vocalist)
For more info + MP3s on the above awesome discs,
tune into our site @ www.grooveyardrecords.com

Click the (((KILLER GROOVEYARD XMAS IN JULY SUPER 6 PACK SWEET DEAL)))
link below or check out our main page on our site to take advantage of this Special Deal.
Please list the codes for each disc you want when you place your order.
Feel free to order more than one 6 pack "Sweet Deal" to take advantage
of this AWESOME offer/deal available from the Grooveyard.

This DEAL is only available for Payment through PAYPAL.
If you want to place an order through mailorder,
or if you have any questions contact us
with an e-mail at: grooveyard@juno.com
***********************************
WE HAVE RECENTLY UNLEASHED (((GROOVEYARD RADIO)))
TO THE WORLDWIDE HEAVY GUITAR MASSES VIA THE INTERNET.
YOU CAN HEAR TONS OF KILLER BBB JAMS + RIFFAGE @ GROOVEYARD RADIO.
PLUS WE HAVE ALSO RECENTLY ADDED KILLER NEW TRACKS TO THE PLAYLIST.
THANKS A MILLIION TIMES OVER FOR TUNING IN AND SHOWING US
YOUR EXCELLENT LUV & SUPPORT @ KEEPING THE ROCK ALIVE!
TUNE IN AND JAM GUITAR HEAVY WITH US @
::GROOVEYARD RADIO:: 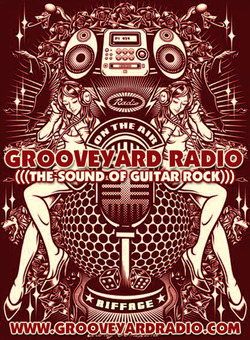 Thanks for your continued interest and support
in keeping REAL guitar music alive.
The Grooveyard appreciates it.

(((RIP IT HARD WITH THE GROOVEYARD)))