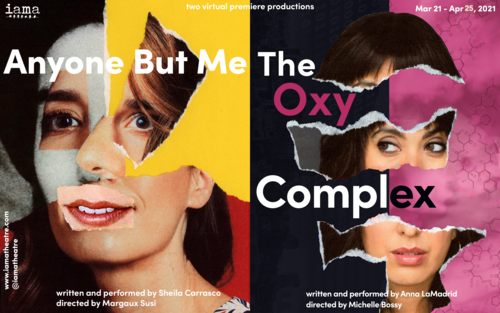 “STELLAR… LaMadrid and Carrasco are such strong performers… each uses her show to explore identity and personhood from a Latina perspective…. ‘The Oxy Complex’ and ‘Anyone But Me’ provide us with some much needed company.” — Los Angeles Times

“POWERFUL LATINA VOICES … draw the audiences into their conflicted existence with skill and compassion.” — Splash Magazines

“SOLO PERFORMANCE ART OF THE HIGHEST CALIBRE. Sheila Carrasco is simply brilliant. See this show, it is not to be missed!” — Theatre Notes

“DELICIOUSLY FUN… LaMadrid brings an authentic vibe and energy to each and every character she inhabits.” — Front Mezz Junkies
Anna LaMadrid and Sheila Carrasco, two fiercely funny Latinx-American women have performed, filmed and premiered their respective solo comedic plays about female Latinx identity in production with IAMA Theatre Company in Los Angeles. Anyone But Me, written and performed by Sheila Carrasco, directed by Margaux Susi, and The Oxy Complex, written and  performed by Anna LaMadrid, directed by Michelle Bossy, filmed live at L.A.’s Pico Playhouse and premiered virtually on March 21 at IAMA Theatre Company online, where each will continue their online run through April 25.
Anna LaMadrid’s The Oxy Complex
Set during the 500th day of quarantine, Anna LaMadrid’s The Oxy Complex is a dark comedy exploring love, sex, loneliness, trauma, and the hormone that affects it all — Oxytocin, also known as “the cuddle” or “love” hormone.
Read More At Shark Party Media
TRAILER
PHOTOS
TICKETS
Sheila Carrasco's Anyone But Me:
Sheila Carrasco dissects the psyches of women who struggle with self-identity, exploring the personas we create in order to get by. From the local grocery clerk, to your neighbor's teenage daughter, to that lady from the cult — this play is about women who want to be someone they are not. Someone better, easier, stronger... anyone but them.
Read More at Shark Party Media
TRAILER
PHOTOS
TICKETS
For tickets and more information visit www.iamatheatre.com
--
Anna LaMadrid and Sheila Carrasco Media Contact:
Kathryn Musilek, km@sharkpartymedia.com