Dear friends and neighbors:
A couple of minor quick updates for this gloomy Monday morning (remember all of you who were excited about cooler weather... I was not one of them....). 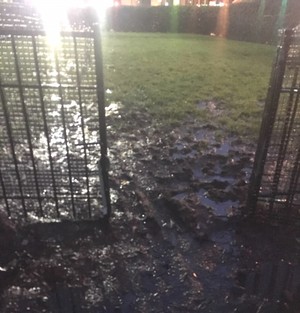 I’m providing this narrative as much to inform you about what occurred and to ask that you respect the barriers that have been put up, nut also to say thank you to our neighbor who reached out to me this morning about this safety hazard.  This type of our own informal Hoboken neighborhood watch system is what helps us contain potentially dangersous situations quickly.  So please don’t hesitate to reach out to me, to the City via Hoboken 311, to any councilmember or to call either 911 or the Hoboken Police Departments non-emergency line at 201/420-2100.  We are better working together. 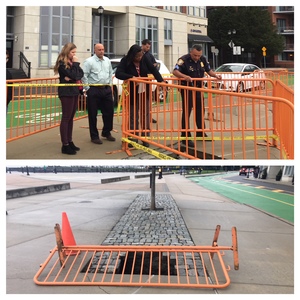 Top picture, left to right: Jennifer Gonzalez, Director of environmental Services, Leo Pelligrini, Director of Health and Human Services, Kimberli Craft, City Engineer, Joe Lupo, Office of Emergency Management, Sgt. William Montanez, Head of Office of Emergency Management.  Bottom picture how I found it this morning before OEM et al came.
I have more updates, but these had some time sensitivity to them.  I am working on a second update that will send out separately.  As always, feel free to reach out if you want to discuss this further, or anything else, by email or by phone 201/208-1674.  And please forward this to anyone you think would benefit from hearing about this.