The Philosothon Project continues to provide a creative forum for new and exciting developments in education. Teaching children and young adults to be good independent thinkers remains a cornerstone of this project. The following newsletter outlines some of the important developments over the past 12 months. In summary, these have included many new Philosothons, new training opportunities and a great deal of engagement in the educational community throughout Australasia. A growing number of regional schools and schools dealing with students from low socio-economic backgrounds are participating in Philosothons throughout Australasia. In part, this is because of the funding made available from the Templeton Religion Trust. But it is also due to the hard work of many people, people such as the FAPSA Chair, Dr Laura D'Olimpio, Treasurer Dr Alan Tapper and the current secretary Jane Kirkham. We also thank Simon Kidd for his help as secretary over the first two years of the Project.  Earlier this year we also welcomed an additional voice on the Project Executive Committee in Professor Rob Wilson. These busy people have enabled the project to flourish. 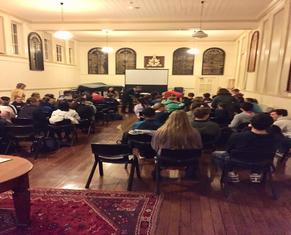 The Australasian Philosothon is less that month away and we are looking forward to welcoming students from throughout Australasia to Canberra for three days of philosophical discourse. Some of the topics include: "Free Will and Determinism",  "The Veil of Ignorance" and "There is no such thing as digital death and can the internet help us live forever". We also have a wonderful array of speakers and activities planned. Dr Jennifer Glasser will present on the topic "A meeting point between Philosophy and Politics Lipman meets Hannah Arendt" & Michael Walsh will speak on the topic "Why Critical Thinking?". We are excited to be using a new format this year that will enable more schools to participate. Attached to this email is a Press Release about the event.
There have been some new Philosothons in regional parts of the country and you will also find below some reports from those events. Included here is also report from the recent VAPS Senior Philosothon.
Please take advantage of the opportunity to apply for a grant. We are in the last twelve months of the Project and these funding opportunities finish in August next year.
The following dot points focus on developments over the past twelve months.
warm regards
Matthew Wills
2018-2019 Philosothon Project
New Philosothons.
Four newsletters have been produced and distributed to over 5000 teachers in 2018. https://www.philosothon.net/newsletter.html
The Australasian Philosothon is planned for Oct 1st-3rd 2019 and planning is well under way with judges and participating schools appointed.  https://philosothon.org/2018AustralasianPhilosothon/2018Home.html
New resources have been developed as a result of the grant funding. We approached several people and some excellent age appropriate resources have been developed during the first eight months. Attached to this report is one example of a resource that has been developed.
An extensive piece of research was done on the 2018 Australasian Philosothon. The TRT funding provided the funding for this research done by Dr Rachel Buchanan at Newcastle University. This research was helpful for forward planning. Rather than copy the document here I have provided a link below to this research; http://philosothon.org/AustralasianPhilosothonReportBuchanan.pdf
Manuals have been revised and produced for Students, Organizing Teachers and Judges. Regional Philosothon manuals have also been redeveloped. Click here for the link.
One exciting new initiative which was funded by the Project was the development of software which can be used to send out invitations, gathering information, co-ordinating students, facilitators and judges, scoring and feedback. This was trialled at the 2018 Australasian Philosothon and will be rolled out in 2019.
The Philosothon Project Office has offered an effective means of production and communication over the past year and has been efficient in the use of its small monthly allocation.
The procedures for grant application and processing have been regularly updated and revised due to changing needs. eg. The development of a NT Professional development process has had to be accommodated. See: https://philosothon.org/PhilosothonProjectMainGrants.html
Financial reports have been made to FAPSA every two months. Expenses have been measured against each Budget Expenditure item. Also a report was recently presented the FAPSA AGM.
Teachers, judges and Phd Philosophy students have been offered subsidies for Professional development opportunities, to date. (See list below)
A little bit of money continues to go a long way already with many new Philosothons starting up in regional and remote Australia. Armadale, Orange, Dubbo, Albany, Philip Island, Mornington Peninsula and Cairns are all in regional parts of Australasia. Reports have indicated a great deal of satisfaction from those involved. Sue Paff continues to offer schools in regional areas a great deal of support and expertise as they start up Philosothons.
We are exploring options with the TRT for ongoing grant support in 2020-24.
All resources have been placed online for participants and stakeholders. The newsletters have provided a wonderful way of distributing publicity.
The NT Philosothon Project has been reworked several times in order to make it workable within the tame frame of the grant timetable. See NT Philosothon Project Phase V here; http://philosothon.org/2019NTProject/NTProjectBriefV.docx
The Project Manager has travelled for meetings extensively around Australasia over the past twelve months for meetings with stakeholders. He has met with the FAPSA Philosothon Executive team monthly to report on developments.
The Project Manager delivered a paper entitled “Old Turkey Tom & Establishing a Philosophical Community of Inquiry for Aboriginal Students.” And the title of the conference was: Educational possibilities brewed with place, people and philosophy.
PHILOSOTHON REPORTS
New Zealand Philosothon
St Paul’s Collegiate School this year. The event expanded to 7 schools this year, involving nearly 70 students!
School participating were:
St Paul’s Collegiate School
Waikato Diocesan School for Girls
Hamilton Boys High School
Hamilton Girls High School
Hilcrest High School
Sacred Heart High School
Tauhara College, Taupo.
The results were as follows:
Best Junior Performance – Cooper Jones, Waikato Diocesan School for Girls
Best Senior Performance – Stella Slomp, Hamilton Girls’ High School
Best school Performance – Hamilton Girl’s High School.
Mark Bellham St Peters College
Central West Philosothon
On Friday, 3 schools from Dubbo and Orange came to Kinross Wolaroi School for the inaugural Central West Philosothon. 3 schools out of 10 invited schools from Parkes, Forbes, Dubbo, Orange and Bathurst regions was a good turnout considering many schools were unfamiliar with the event.
The 3 schools were St John College Dubbo, Orange Anglican Grammar School and James Sheahan Catholic High School. With 2 teams from SJC and KWS, it meant an attendance of 48 students. 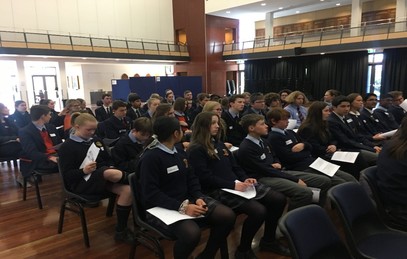 Click here for the rest of the report
New England Regional  Philosothon 2019 Report
Held: Wednesday June 26th 2019
On Wednesday June the 26th, four schools from the Armidale  region, took part in the inaugural New England Regional  Philosothon. These schools were – The Armidale School, Armidale Secondary College, O’Connor Catholic College and PLC Armidale. In total 64 students taking part.
The New England Regional Philosothon was hosted by The Armidale School and held in two large spaces which included  partitioned areas in the school Memorial Hall, allowing for the Community of Inquiry (COI) sessions and another room with seating for parents, teachers and students to take part in introductory and Fast Philosophy workshops.  Sue Paff had previously visited all schools taking part to ensure they were familiar with ‘what is Philosophy” and to set up practice opportunities before the day to familiarise the students with the COI format. Information was sent to all schools prior to the event with the stimulus material, which assisted students to prepare.
Judges from the University of New England school of Philosophy, joined experienced judges from the Northern NSW Philosothon at the New England event, offering sound and encouraging feedback. 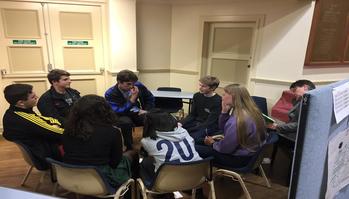 The following topics were explored on the day:
1.Where is my mind?
2.Should everyone be treated equally?
3.Be Yourself.
4.Big Bang Cosmology and the Existence of God
5.Are our memories reliable?
It was a long and highly enjoyable and productive day beginning at 9am and finishing at 7pm with speed philosophy, moral dilemmas and finally awards
VAPS Philosothon
Another wonderful VAPS Secondary Philosothon took place on Tuesday 13th Aug at Wesley College. ACGrayling began the evening with "A Letter to a Young Philosopher" written especially for the occasion, and presented a signed framed version to the winning student Max as the finale.
WINNING SCHOOLS as per judges
1. Wesley College - Ben Reeves
2. Menton Grammar School - Hayley Lewkowicz
3. Loreto College - Peter Foord
STUDENT VOTES
1. FOR OUTSTANDING CONTRIBUTIONS: Students used an app to vote for one outstanding contribution after each round. (they referenced the speaker)
Mila Lawson was most often referenced.
Congratulations to the following grant recipients
There are still more grants available so apply here:
Regional Philosothon Grants 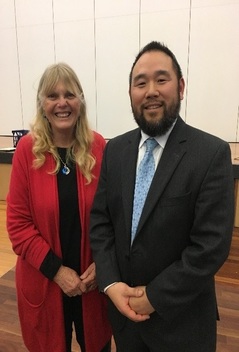 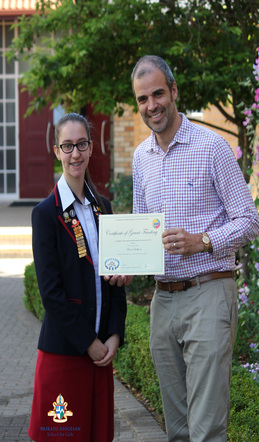 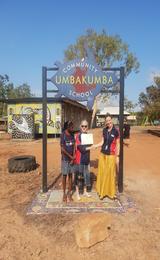 Robert Neurath NSW
Forward this email to a friend
We invite you to consider applying for one of the grants listed below. You might wish to take advise from us going forward or we are happy to provide the funding and then watch as you create something uniquie to your school. These are some of the grants available.
This means we offer funding packages and assistance to establish your school as a hub for the development of critical thinking skills. Philosothons are now an well established mechanism for schools to take seriously this aspect of the curriculum helping thier students develop critical thinking skills, collaboration skills and creative reasoning. This inittiave is supported by academics thoughtout Australia in both the tertiary sector, and the school sector as well as many that are passionate about this area.
New Regional Philosothons: Subsidies are available for schools to help regional and remote schools cover the costs associated with starting up their own local Philosothon. This will involve other schools in their area. Click here for an application form.

New Philosothons will be supported in cities that do not currently have one, including the New Zealand, the Northern Territory, Singapore and Hong Kong. Click here for an application form

Northern Territory Grant applications- These are travel grants to enable teachers to participate in professional development opportunities related to the Philosothon Project. Some priority will be given to indigenous teachers and or teachers of indigenous students. Please fill in the online application form and we notify you ASAP if your application was successful. Click here to apply.

Travel & Participation subsidies: Subsidies will be provided to assist students/staff who might not otherwise be able to participate in a Philosothon. This might be because they live in remote locations or because the school is dealing with students from low socio-economic backgrounds. Click here for an application form.

Training for Phd Students: Training and professional development will be organised to allow students to be trained in the Community of Inquiry pedagogy which, in turn, enables them to act as facilitators in Philosothons. Click here for an application form


Resource development: Teachers and academics will be recruited to consult on and develop age appropriate resources to be used as stimulus material for Philosothons. A website will be developed to house these resources and enable access for all participants. Click here for an application form.

FAPSA is an umbrella organisation which seeks to enrich and expand philosophy education in primary and secondary schools in Australasia. It supports the interests of its nine affiliated Associations through professional development and advocacy initiatives, has an official open access journal, Journal of Philosophy in Schools, and holds a biennial conference. Contact: Project co-ordinator Mr Matthew Wills (e) philosothon@yahoo.com | Ph: +61 (0)400 029 660 |FAPSA Website: http://fapsa.org.au/
Click here for previous newsletters
Over three FAPSA have make available grants for schools and others to set up or participate in Philosothons. Studies have shown that students participating in a philosophical community of inquiry improve on a variety of academic and social measures. If you would like to make this available to your school community click one of the grant links or contact the Philosothon project office.
www.philosothon.net
Contact: Project co-ordinator Mr Matthew Wills (e) matwills59@hotmail.com | Ph: +61 (0)400 029 660 | FAPSA Website: http://fapsa.org.au/ This project was made possible through the support of a grant from Templeton Religion Trust. The opinions expressed in this publication are those of the author(s) and do not necessarily reflect the views of Templeton Religion Trust.