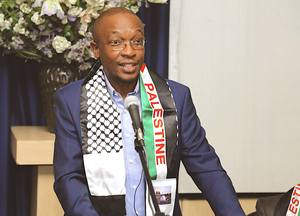 17 October 2016 | http://tinyurl.com/jqjbktv
The human rights and Palestine solidarity organization BDS South Africa welcomes the election of Parks Tau as president of the United Cities and Local Government (UCLG).
Parks Tau, the former Mayor of Johannesburg, current president of the South African Local Government Association (SALGA), ANC Regional Chairperson as well as close friend of the Palestinian struggle was this past weekend elected president of the UCLG - the umbrella body for, or the “UN" of, local governments around the world. The election took place at the 5th UCLG Congress World Summit in Columbia’s capital city, Bogotá, where Tau won by an overwhelming majority of 103 votes to 42.
Cde. Parks Tau displayed great ability and passion when he served as mayor of Joburg. During his term he faced numerous challenges of running a major metropolitan but at the same time he remained an activist-mayor who also advanced the struggles of the poor and the oppressed.
----------
In addition, Comrade Parks Tau has consistently expressed a sense of selfless internationalism and under his leadership, the City of Johannesburg signed various agreements of cooperation with the City of Ramallah in Palestine. Comrade Parks also oversaw the donating and unveiling of a statue of President Mandela in Palestine (http://tinyurl.com/hsjo7j9)
We as BDS South Africa were humbled to have shared several Palestine solidarity and BDS stages and platforms with Cde. Parks Tau and particularly recall his participation in opening the annual international Israeli Apartheid Week (IAW) program in 2014 where he shared a statement on behalf of the ANC. At the IAW launch he said: “We reiterate our resolutions to continue supporting and pledging solidarity with the people of Palestine cognizant of the reality that international solidarity plays an important role in facilitating and enabling the liberation of those people who find themselves in the bondages of structured apartheid rule…[W]e expect this not only through mechanisms of political formations, such as the ANC and of course the Alliance, but we ought to use different platforms when we are in leadership and Government to continue creating networks of support for the people of Palestine."(http://tinyurl.com/hccbrue)
The election of Parks Tau to the UCLG comes at a time when several municipalities across the globe, and particularly in Europe, are adopting boycott of Israel resolutions in support of BDS and the Palestinian struggle. (http://tinyurl.com/zxssolk). We are confident that the Palestinian struggle will continue to be championed by leaders in local government the world over and we will see the establishment of greater support in governance for not just Palestine but those oppressed across the globe.
----------
UCLG is the umbrella body for local government around the world and is made up of more than 1,000 cities. It is not just a major achievement for South Africa but also a great gain for UCLG to have a leader such as Parks Tau as President. The UCLG will certainly grow under his leadership.
ISSUED BY KWARA KEKANA ON BEHALF OF BDS SOUTH AFRICA