The protest, which is being organized by the Palestine Solidarity Campaign (PSC) in Johannesburg, will start at 2pm on Friday 23rd September outside the Israeli Embassy’s Trade Office, 4 Sandown Valley Crescent, Sandton.

The picket is in protest against the the Israeli practice of detention without trial and the Israeli detention of Palestinian children. Currently, there are over 7000 Palestinians imprisoned by Israel; 750 of them are being held under Israel's "administrative detention" (Apartheid South Africa's "Detention Without Trial”), 350 of them are children and 7 of them are Members of Parliament. In the last 11 years alone, more than 7500 Palestinian children have been detained in Israeli prisons and detention facilities (including being held in solitary confinement). Click here.

The picket has been endorsed by a number of former South African political prisoners, some of whom will be present. 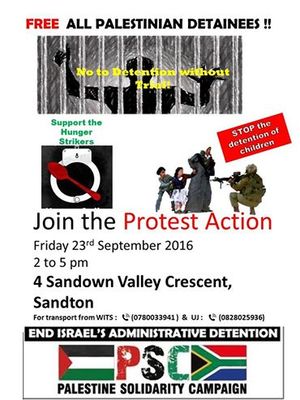