PRESS STATEMENT
This is horrific, 16 shot dead including a teenager, 1500 injured 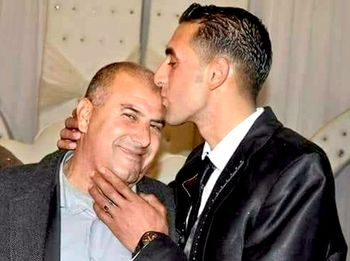 One of the first Palestinians killed by Israel yesterday was 26 year old Amro Samour seen above with his father.
31 March 2018 | https://bit.ly/2pW8JpR
Yesterday 30 March 2018, on Good Friday, thousands of Palestinians gathered, un-armed, at a nonviolent and peaceful protest, dubbed the #GreatReturnMarch, when Israeli snipers started shooting at the gathering, turning the day into Bloody Friday. Israeli snipers shot dead 16 Palestinians, including a teenager, and injured 1500 civilians including over 150 children under the age of 16 (several now left with life altering disabilities).
The human rights and Palestine solidarity organisation, BDS South Africa, calls on government to immediately implement our ruling party's congress declaration and resolution for the "immediate and unconditional downgrade of the SA embassy in Israel to a liason office". The time is now - the time for action, starting with the downgrade, is more urgent than ever! Israel must be held accountable for its abuses and a clear message must be sent to the regime!

Human Rights Watch (click here), Jewish Voices for Peace (click here) and the UN Secretary-General (click here), together with various others, have all condemned this Israel’s latest killing of Palestinian civillians and we call upon our government to take decisive action.
The #GreatReturnMarch is a 6 week protest taking place along the border of Gaza and Israel. Over 75% of the Palestinian people living in Gaza are refugees whose homes are in Israel. The UN has demanded that Israel allow the Palestinians refugees to return but Israel has refused.
One of the first Palestinian to be killed yesterday was 26 year old Palestinian, Amro Samour. He was a farmer who dedicated his life to plant with his father, mother & siblings. He recently got married (click here for photo of Samour with his father). Another tragic story is that of Mohamed Abu Nmr (26), a sand sculpture artist, who just the day before had created a sculpture on Gaza’s Beach reading “I will return”. One Palestinian was shot while praying  (click here for video - warning graphic content). Another Palestinian youth was shot dead while running with a tyre (click here for video - warning graphic content).
To the Israeli lobby who are suggesting that the Palestinians "died" in “confrontations” or “clashes". This is a lie. Palestinians who were killed (they didn't just all of a sudden die) gathered non-violently, unarmed (without any so called rockets) to protest against the fact that they are not allowed to return to their previous homes - a right guranteed by international law. The Palestinians are gathering in the same way that our people gathered at Sharpeville in 1960, the Israelis are killing our Palestinian counterparts in the same way that the Apartheid SA government killed our people. The Sharpeville, Bisho, Uitenhage, Boipatong massacres in which our people were killed were also once termed “clashes” and “confrontations"!
BDS South Africa is urgently engaging with our partner organisations, the MJC, churches, unions and other groups to plan mass actions in solidarity with the Palestinian people in their #GreatReturnMarch six week action as well as in protest against this most recent Israeli violence. Details to follow.