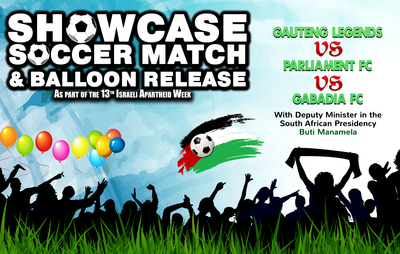 Deputy Minister in the South African Presidency Buti Manamela will form part of a soccer team playing in a showcase match to raise awareness of the Palestinian struggle. Manamela will play with Gabadia FC in Johannesburg on Saturday 11 March at 14h00 against Parliament FC (a football team from the South African parliament). The winner of that game will play against the Gauteng Legends (a group of former professional players). The venue is the Power Lines Tigers Soccer Grounds, Rose Avenue, Lenasia, JHB. Click here for more info.
The event will be joined by Tasneem Motara (Member of the National Council of Provinces and ANC leader) and Pedro Charbel from Brazil. Charbel is the BDS Coordinator for Latin America and forms part of the BDS National Committee (BNC) based in Ramallah which is the head office of the international BDS movement. The BNC is the largest Palestinian civil society and political coalition that leads the BDS movement and has sometimes been compared to the 1980s United Democratic Front.  A “ballon - release” will take place after the game. Members of the media as well as public are invited for both the soccer match and the ballon release.
The event, which forms part of this year’s 13th #IsraeliApartheidWeek (IAW) campaign, is organized by Tigers Football Club, Crescents Cricket Club, the PSA, PSA YL, Embassy of the State of Palestine, BDS SA and the Red Card Israel campaign. The Red Card Israel campaign is calling on FIFA to expel the Israeli Football association because of its inclusion of illegal Israeli settlement teams.
---------- * ----------
Human rights activists slam FIFA for delay in taking action against Israel
For the last two years now the Palestinian Football Association, Human Rights Watch, lawmakers, European Parliamentarians, the UN Special Adviser on Sport for Development and Peace, human rights activists and thousands of football fans have been urging FIFA to follow its own rules and ensure that football teams based in illegal Israeli settlements are excluded from the Israeli football leagues. The red card Israel campaign has asked FIFA to suspend the Israeli Football Association (IFA) if it refuses to comply with FIFA rules. Pressure is mounting but FIFA is delaying and failing to act. Click here for the latest.
Palestinians have long been complaining to FIFA about Israeli attacks against Palestinian players including arrests and torture of Palestinian athletes, denial of freedom of movement, and bombing of their football stadiums. This is in addition to Israel’s routine disruption of Palestinian efforts to import necessary football equipment. Racism is rampant in Israeli football with Israel even having segregated youth leagues that separate Jewish players from non-Jewish players. Violent anti-Palestinian racism are common with Israeli clubs and fans notoriously chanting “Death to the Arabs” at soccer matches.
In 1961 South Africa was also expelled from FIFA. South Africa was readmitted in 1963 by pro-Apartheid supporters who attempted to argue that politics should stay out of sports. However, South Africa was eventually re-expelled in 1964 until Apartheid and its human rights abuses ended.
For media interviews with the IAW South Africa Team, please contact: Alex Mdakane, National Spokesperson of IAW in South Africa [+27 (0) 785268663] or Nabeela Sujee, National Convener of IAW in South Africa [+27 (0) 726370386].
www.iawsouthafrica.com // www.twitter.com/iawsouthafrica // www.facebook.com/iawsouthafrica // www.instagram.com/iawsouthafrica