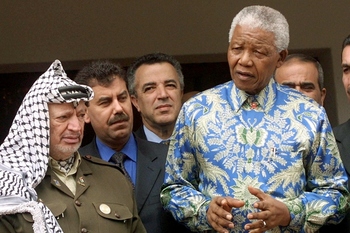 01 July 2017 | https://tinyurl.com/y9j3tqnz
Palestinian political parties including Fateh and Hamas have written messages of support to South Africa's governing party, the ANC, ahead of its policy conference that started on Friday 30 June and ends on Wednesday 05 July. Both have, in the year of Oliver Tambo, called on the ANC for strong action against Israel until it abides by international law.

During the 1980s Israel supported Apartheid South Africa, however, on the other hand, the Palestinians backed the anti-Apartheid struggle providing the ANC and other liberation movements with military training, financial resources and other forms of support.
In their letter to the ANC, Fateh writes:
"We welcome the ANC’s 2015 NGC position that 'the ANC must continually review South Africa’s relations with the State of Israel and encourage disengagement on programmes and activities that may impact on our solidarity with the people of Palestine'. Indeed, Israel in the last two years has expanded its illegal settlements, stealing land and demolishing Palestinian homes in blatant violation of international law and the situation has worsened incredibly so. In this context we support the proposal and the submission made to the ANC by South African civil society and BDS movement on ensuring that Israel abides by international law."
Fateh has also called for support of BDS and further implementation at a government level stating:
“We welcome the strong position of the ANC on encouraging an Israel travel boycott as well as the ANC’s boycott of Israeli settlement products, the settlement industry and Israeli products/services generally coming from the OPT. We are confident that the ANC Policy Conference in its deliberations will reaffirm previous positions and we look forward to these ANC resolutions becoming official South African government policy.
The virtual entirety of Palestinian political parties including Fateh and the PLO support and work with the BDS movement just as how the ANC had sanctions as one of its pillars in the struggle against Apartheid. We call on the people of South Africa, and in particular the ANC and its branches, to continue supporting the BDS campaigns and other Palestine solidarity initiatives.
We humbly call on you, amidst all your important deliberations, to remember our plight. We believe that numerous interventions and interactions have been ignored and undermined by Israel and that the time to increase government pressure has come. This pressure will help us in our peaceful negotiations and help ensure urgency from Israel which has begun to believe that it can act with impunity as it believes there will be no consequence to any of its actions.” Click here to read the letter from Fateh to the ANC.
Meanwhile Hamas, who in 2015 year, on an official party visit to South Africa, met with the ANC's leadership has written:
"As we brace ourselves for further onslaughts from the apartheid and colonial state of Israel, we welcome the support of the South African people and, especially, the ANC. With the worsening of the situation of Palestinians – in Gaza, the West Bank, inside the Zionist state and in the diaspora, and as we witness the rise of the right wing in the West, we call on our allies around the world to strengthen their resolve to end Israeli apartheid.
"In particular, we hope that you will see it fit to discuss how South Africa might begin the process of downgrading its relations with Apartheid Israel and, ultimately, applying full sanctions on that state, as numerous states in the 1970s and 1980s downgraded and severed relations with apartheid South Africa in order to work towards the liberation of all South Africans.” Click here to read the letter from Hamas to the ANC.
The ANC holds a policy conference every five years where members determine policy that will guide the organization for the subsequent period. Click here to find a list of ANC’s previous resolutions and policies on Palestine.
BOYCOTT, DIVESTMENT AND SANCTIONS AGAINST ISRAEL IN SOUTH AFRICA (BDS SOUTH AFRICA)
5th Floor | Mishumo House | 77 De Korte Street | Braamfontein | Johannesburg
PO Box 2318 | Houghton | 2041 | Johannesburg
T: +27 (0) 11 403 2097 | M: +27 (0) 74 054 3826 | F: +27 (0) 86 650 4836
W: www.bdssouthafrica.com | E: kkekana@bdssouthafrica.com
www.facebook.com/bdssouthafrica | www.twitter.com/bdssouthafrica | www.instagram.com/bdssouthafrica
BDS South Africa is a registered Non-Profit Organization. NPO NUMBER: 084 306 NPO
BDS South Africa is a registered Public Benefit Organisation with Section 18A status. PBO NUMBER: 930 037 446