October 26,  2011
IN THIS WOWW!
WADE HAYES APPEARANCES - (Click here for more details - or scroll to the bottom of the newsletter)
Wade wore thi

s shirt at the breakfast and many of you wanted one. We got an order of them through the Oklahoma Country Music Hall of Fame. We have shipped most of the t-shirts to those who ordered. I still have a few that haven't claimed theirs. November 15th is my deadline for them. I have a waiting list for unclaimed shirts. If you'd like to be included on that list, let me know. All small shirts and all 3X shirts have been claimed.
Country Music Hall of Fame
The Country Music Hall of Fame has a Wednesday series of programs titled Cook Out Country, an all-inclusive lunch including cookout favorites, live entertainment, autograph signings and photo opportunities. Wade was the featured artist on October 19. The program might have said "cook out," but the weather disagreed. The show was moved to an 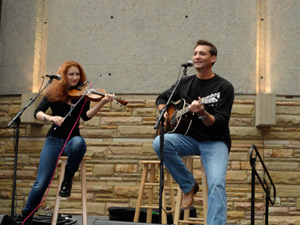 inside area, which provided an opportunity for more people to hear Wade's music. It was then available to those in the cafe and individuals walking through the main floor of the hall. I even watched people stop on the massive stair case that leads to the second floor, lean over the rail to listen. Wade had a very good reception. Megan Mullins was along to play fiddle and contribute her alto harmonies.
Wade opened with what he termed his "warm-up" song for acoustic shows, Don't Make Me Come to Tulsa, written by Don Cook, Wade's friend and his first producer. He followed that with The Day That She Left Tulsa, Good Day to Go Crazy, God Made Me to Love You. He laughingly told the audience that he'd written that song for his dog, Jack. I call him "my sweet little hemmoroid. He's a pain in the --, but I love him anyway." He continued with Don't Stop, What I Meant to Say, On a Good Night and Old Enough to Know Better. He told the crowd that he thanked God for that song which was #1 on the charts for two weeks and he still gets a check from it every now and then. He also mentioned that he and Megan play in Randy Owen's solo band and they'd just returned from NC after doing a show for Dale Earnhardt, Jr.

SITE UPDATES
http://www.wadehayes-woww.com
Fan Zone - Welcome Charlotte and Mary Schudlick, Denise Groce Davis, Christie Moore and Sue Bogucki
Tour Page - Fiddle & Steel show added
Links Page - new review of Place to Turn Around
I have a backlog of show pics I will be working on when I get back from vacation.

PLACE TO TURN AROUND, WADE'S NEWEST ALBUM
To Order
http://www.wadehayes-woww.com/Music/placetoturnaroun.html
Let's see if we can get some download action for Wade and his great album, Place to Turn Around - and give him a boost at Amazon and iTunes. I'll designate a download track in each WOWW! for anyone willing to spend an extra 99 cents to promote his career - concentrating on one track will help us create more of a stir. A click on the above link will give you access to all his albums, and 3 singles that were released, at both iTunes and Amazon.
Album: Place to Turn Around
This WOWW!'s selected track: Place to Turn Around - October selection
Two cuts from the McHayes Album have been added to iTunes and Amazon.com
Wade and Mark McClurg teamed together for a short time as the duo McHayes. Their album, Lessons in Lonely,  was not released to the public. (A shame, really, there was some great music on it.) iTunes and Amazon.com have added two cuts from that project. It Doesn't Mean I Don't Love You, written by Trent Willmon, has Wade singing the lead and Mark doing the high harmony. The Wrong Kind of Right has Mark singing the lead and Wade doing the harmony.
ON THE NET
We've added a link to a new review of the album, Place to Turn Around. This one, written by Cheryl Hill, is featured on the Country Music-America web site.
The Links page is your source for finding pics, videos, reviews on other sites.
WadeHayes-WOWW.com Links Page
WEB SITES
Official Site
WOWW! Site
WOWW!-Pics Site
My Space
Facebook Fan Page
Facebook Friend's Page
For early Wade Hayes archives visit Cheryl Hill's site. We appreciate the time and expertise that Cheryl has contributed over the years to feature Wade.
Wade on the 2steppin site
Fan has a tour jacket for sale
it is a LARGE blue denim jacket in absolutely MINT A+ uncirculated condition (never worn ever); Wade autographed it in black Sharpie above the left hand front pocket; it has an unbelievably large beautiful patch on the backside (has to be seen to be appreciated) - it says WADE HAYES  TOUR 1996  ON A GOOD NIGHT; it is made by Authentic Eagle Dry Goods Co and Made in the USA; I am not very handy with computer and digital camera , etc usage so I don't know how to send pictures , etc online but believe me anyone who is interested/buys it will in no way be disappointed or complain; I am looking for a minimum of $150 or highest bidder - it is a well-worth-it collector's item.  Bill Brady onjnicks@yahoo.com
BOOKING INFORMATION
Refer talent buyers to Wade's management
Mike Robertson Management
Phone: 615-329-4199
Fax: 615-329-3923
E-mail: assistant@mrmmusic.com
If you want to see Wade in your local area, ask your favorite venues to seek booking information.
Supplemental Booking - especially Texas
Mike McCary
mike@markchesnutt.com
If your venue is interested in booking Wade, an offer can be submitted at this site:
www.mccaryentertainment.com/wadehayes
ABOUT WOWW!
WOWW!, an e-mail newsletter to Wade Hayes fans, began in December, 1997. Subscribers reside in FIFTY (50) states as well as -
Australia, Brazil, Canada, Germany, Iraq, Ireland, Italy, Japan, Netherlands, Scotland, South Korea, Spain, Switzerland, New Zealand, Hong Kong.
WOWW! E-mail
Mailing Address:
WOWW! News / Helen Neal
P O Box 148274
Nashville, TN 37214
Messages for Wade can be sent to the same address. Mark ATTN: Wade Hayes
Wade has requested, "No presents, please."
Wade Hayes Appearance Details
Always check before traveling.
To return to the top of the newsletter, click h