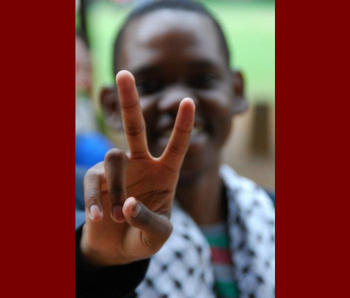 01 June 2017 | https://tinyurl.com/yauan6zu
The human rights and Palestine solidarity organisation BDS South Africa joins the South African student movement and the Wits University community in mourning the loss of former Wits University SRC Student Government President Sibulele Mgudlwa. We share our deepest condolences with his family, friends and comrades.
President Sibulele, a graduate in Bcom Accounting Sciences, was a student activist, a member of the South African Student Congress (SASCO), a devout Christian and a Palestine solidarity activist. Mgudlwa is described by his friends as humble, diplomatic, articulate, caring and fierce human being but mostly importantly as someone who always rose in defense of others.
In addition to his student activism, Sibulele was also involved in Palestine solidarity activities at Wits University as well as in the boycott, divestment and sanctions against Israel campaign speaking at various public events (click here for a video of President Sibulele speaking at a Palestine solidarity event in Newcastle, KZN).
In 2014, Sibulele formed part of a group of volunteers who travelled from Johannesburg to assist in the organizing of the historic pro-Palestine protest march in Cape Town - the largest protest this country has seen since the dawn of democracy (click here).
Mgudlwa suffered victimization by the Israeli lobby due to his Palestine solidarity activism. In 2013 Sibulele formed part of a group pro-Palestinian supporters that protested the performance by an Israeli pianist, Yossi Reshef. Following pressure from the Israeli lobby, Sibulele and 10 others, who would later be known as the “Wits 11”, were subjected to a disciplinary process by the University and were handed suspended expulsion sentences in 2015 for their participation in the protest (click here).
In a country where institutions of higher learning are characterized by high levels of academic and financial exclusions towards black students, for President Sibulele and others to have put their degrees on the line gives us a great lesson in humanity and was a demonstration of a profound act of international solidarity towards oppressed peoples.
President Sibulele Mgudlwa passed away at the tender age of 26. His life was short but eventful and meaningful. He will be remembered for his contributions in the struggle for, among others, the betterment of students, the freedom of Palestinians from Israeli Apartheid and indeed, in the struggle for a more humane world.
Robala ka kgotso Qabane, we are poorer without you.
The funeral service of Sibulele Mgudlwa will take place this weekend on Saturday the 3rd of June in the Eastern Cape.
ISSUED BY KWARA KEKANA ON BEHALF OF BDS SOUTH AFRICA