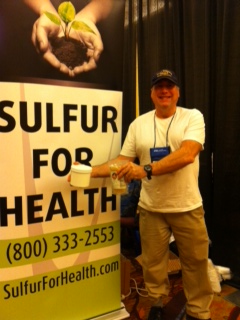 IG Farben Logo, IG Farben Offices, IG Farben Factory in Germany.... The Antidote to Genocide!!
IAHF List: IG Farben owned the patent on Zyklon B, the pesticide used to gas prisoners to death inside the Nazi concentration camps. They fueled Hitler's rise to power, ran the concentration camps, and have been the push behind WW2, WW2, and the modern push for a New World Order.
Matthias Rath, MD documents all of this in his book The Nazi Roots of the Brussels EU which has a lot to say about the UN Codex efforts to ban consumer access to vitamins and minerals within the therapeutic range.
In the 1940s and 50s, a concious and deliberately evil effort was made to break the sulfur cycle in order to make us all sick, and to increase pharmaceutical profits in every sort of toxic Rx drug...
Today, we all have the power to counter this evil agenda, to reclaim our health, and that of our pets and livestock by countering this madness through the simple act of assisting in the transport of oxygen into our cells, and wastes from the cells-- by ingesting sulfur. In this alert, I'll be examining numerous health benefits of taking sulfur for humans, pets, and livestock including many that I haven't looked at before!
If enough people become aware of this, we can stop the NWO's UN Agenda 21 depopulation and chemtrail genocide plans right in their tracks, (including their efforts to kill us with chemtrails) while crippling Big Pharma's profits!....
In 1952, IG Farben, the huge pharmaceutical/chemical conglomerate that fuelled Hitler's rise to power and which ran the concentration camps during Nazi Germany was theoretically "broken up" by the Nuremburg War Trial when it was changed into Hoechst, Bayer and BASF--- but it really never went away, and all of us today remain haunted by its legacy.
This same Pharma Cartel which triggered off the first and second world wars is continuously striving to push us into a third and to spearhead the destruction of national sovereignty, and to usurp our last remaining freedoms- the goal is to make us all microchipped slaves on a global plantation.
Back in the 40s and 50s, Big Pharma was acutely aware of Otto Warburg's Nobel Prize in 1930 in which he discovered that cancer can't live in the presence of oxygen.
They realized that if they could only break the sulfur cycle, they could trigger off a huge incidence of every sort of degenerative disease by blocking people from getting an adequate amount of oxygen into the cells, and by keeping toxins trapped in the cells! So they went to the USDA, and said "Go to the farmers, tell them to stop using manure as fertilizer, and to instead use synthetic, petroleum based fertilizer derived from coal tar dye, they'll get increased crop yields!"
Farmers didn't realize this would make us all sick, they were only focused on their profits...
With all of us undergoing massive biological attack via chemtrails, sulfur is our best means of detoxification. We can all derail these New World Order genocide plans through the simple act of spreading the word on the following:
HERE ARE WAYS SULFUR CAN HELP HUMANS, PETS and LIVESTOCK
In addition, when you're under stress, you dump acid into your small intestine. Sulfur helps neutralize that acid to help you be more calm and grounded! The oxygenation gives you energy and increases your libido! It helps speed your metabolism to help with weight loss, when you can get more oxygen into your cells it helps burn fat, and helps you have the energy you need to exercise longer and more frequently!
I have been selling a lot of sulfur to endurance athletes!
CAVEAT EMPTOR!
Not all MSM is created equal! Mine works. A lot of the MSM on the market is garbage because its quadruple heated to 486 which damages it so you can't grow sulfur crystals. Its the crystals that enable sulfur to work properly in the cellular matrix of the body. Its the crystals that enable sulfur to open up cell membranes allowing oxygen to flood in, pushing the toxins out!
Opti brand is the most commonly sold MSM in the world, and it has this problem. You can prove it to yourself by trying to grow crystals with it in a coffee cup. Mix it with water to get it to dissolve, pour off most of the water leaving only a thin film to evaporate overnight. In the morning you wan't get the sort of crystals that you will with mine, you'll get a scuzzy looking film, not sharply defined crystals!
If you drink this, you hardly notice any biological effect, but with mine you get so much energy it will keep  you awake at night if you take it too late in the evening! Opti also contains an anticaking ingredient called silicon dioxide that deactivates it by combining with it! This is ground up quartz! Don't be fooled by this stuff because its often private labelled so you don't know what you're getting!
My sulfur works! It will protect you, your pets, and your livestock!
You can get 1-4 pounds or sign up for autoshipping at this link.
If you want 10 lbs at the discounted price of $32/ lb with FREE SHIPPING, use the IAHF paypal link.
(If you are outside the USA and want 10 lbs email me at jham@iahf.com for a shipping quote.)