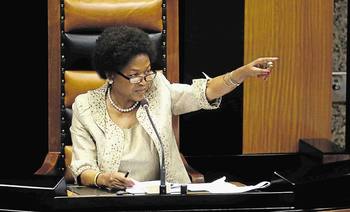 Messages of support have flowed in for the position taken by the Parliament of South Africa in rejecting a visiting Israeli delegation. Fateh, a member of the Palestine Liberation Organization (PLO) and sister-party to South Africa’s governing ANC, has written to the SA Parliament saying:
"Fateh commends the parliament of South Africa for sending a clear and strong message to the Israeli regime by refusing to meet with its officials…The decision by South Africa comes on the backdrop of SA’s ruling party's recommendation to downgrade the South African Embassy in Tel-Aviv. We are confident that we will see continued downgrading of relations between the two countries as a demonstration of disapproval by South Africa to the unacceptable treatment by Israel…we salute all South African solidarity organizations, human rights groups, the local BDS movement, trade unions and others who have remain resolute in their support of the Palestinian struggle against Israeli Apartheid.” (Click here for the full letter by Fateh.)
Palestinian political party, the PFLP, which counts among its leaders the prominent Leila Khaled, has also sent a letter of support stating:
"We salute your decision to shun the Israeli delegation due to visit South Africa! We welcome the support of the ANC parliamentary caucus on this issue and trust that other parties have also adopted similar positions - to not fraternize with the Israel Government!" (Click here for the full PFLP letter)
Members of the South African Jewish community, from the orgaiznatoin SA Jews for a Free Palestine, have welcomed the snub saying:
"We, as Jewish South Africans, warmly welcome the decision by the Parliament of South Africa to shun a visiting Israeli delegation. Like the recommendation to downgrade our embassy in Tel Aviv, this rejection of the Israeli invite is a form of concrete action beyond mere rhetoric that sends a clear message to Israel that for as long as you illegally occupy Palestinian land it will not be business as usual. This decision communicates that...we, as a country, stand with the oppressed Palestinians and their progressive Jewish Israeli allies who are fighting for an end to Israeli apartheid, by advancing solidarity actions and the BDS boycott…the Parliament of South Africa is, indeed, reflecting the views of the majority of our people in refusing to meet with this Israeli delegation." (Click here for the full statement by the SAJFP)
SA Jews for a Free Palestine (SAJFP) also joined Palestinians in cautioning others who may be considering meeting with the Israeli delegation:
"To those who may still be considering to meet with this (or other future) Israeli delegations we urge you to refrain from doing so – you are doing a disservice to Palestinians, progressive Jewish Israelis as well as Jewish South Africans who are opposed to human rights abuses including Israel’s treatment of the Palestinians people."
Organizations to have come out in support of the decision by the Parliament of South Africa include HAMAS, COSATU and others (click here). The overwhelming response in support of Parliament's principled position, under the ANC's leadership, makes clear that our country must not be a play ground for the Apartheid Israeli regime and its stooges.
While this move is being celebrated it also sends a message to our government departments that the elected leadership of South Africa does not flirt with the oppressive regime of Israel. This position of downgrading relations must be respected by all officials. There are some South African government employees and deployees who have behaved in ways that betray the solidarity with Palestinians and it is vital that they be held to account and recalled where necessary.
The human rights and Palestine solidarity organization BDS South Africa values the strong position of our Parliament because us South Africans under Apartheid lived in similar conditions to that of Palestinians living today under Israeli occupation - in Palestinians, in both suffering, struggle and joy, we see ourselves.
We were once the beneficiaries of global boycotts, sanctions and divestments which assisted greatly in ending the racist tyranny here in our land and we hope the same for Palestinians and their progressive Jewish Israeli allies fighting for an end to Israeli Apartheid and for a just peace.
[Click here for a statement by the Chairperson of the ANC Parliament Study Group on International Relations and Cooperation, Siphosezwe Masango. Masango, a member of Parliament, is also the Chairperson of Parliament's Portfolio Committee on International Relations and Cooperatiom]
ISSUED BY KWARA KEKANA ON BEHALF OF BDS SOUTH AFRICA
BOYCOTT, DIVESTMENT AND SANCTIONS AGAINST ISRAEL IN SOUTH AFRICA (BDS SOUTH AFRICA)
5th Floor | Mishumo House | 77 De Korte Street | Braamfontein | Johannesburg
PO Box 2318 | Houghton | 2041 | Johannesburg
T: +27 (0) 11 403 2097 | M: +27 (0) 74 054 3826 | F: +27 (0) 86 650 4836
W: www.bdssouthafrica.com | E: kkekana@bdssouthafrica.com
www.facebook.com/bdssouthafrica | www.twitter.com/bdssouthafrica | www.instagram.com/bdssouthafrica
BDS South Africa is a registered Non-Profit Organization. NPO NUMBER: 084 306 NPO
BDS South Africa is a registered Public Benefit Organisation with Section 18A status. PBO NUMBER: 930 037 446