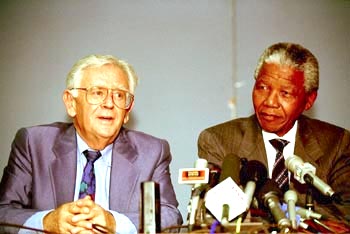 Joe Slovo (23 May 1926 – 6 January 1995; born Yossel Mashel Slovo) was a long-time leader of the South African Communist Party (SACP), a leading member of the African National Congress (ANC), a commander of the ANC's anti-apartheid military wing Umkhonto we Sizwe and later served as Minister of Housing in Nelson Mandela's administration.

A South African of Jewish-Lithuanian family, Slovo lived in exile from 1963 to 1990, conducting campaigns (including military operations) against the apartheid regime. Comrade Joe was at once a South African struggle stalwart and at the same time an internationalist who was also a consistent critic of Israeli Apartheid.
----------
After fighting against Nazi Germany, Joe Slovo visited Palestine where he critiqued the so-called socialist but flawed Israeli "kibbutz" system. He also condemned the pro-Israeli idea that "the land of Palestine must be claimed and fought for by every Jew" adding that this pro-Israeli colonization of Palestine "meant the uprooting and scattering of millions whose people had occupied this land for over five thousand years".

When it came to the issue of Israel, he stood out and stood up from within his community to make it clear that what Israel is doing to the indigenous Palestinian people should not be done in the name of Judaism – that not all Jews (like himself) support Israel, Cde. Slovo said:
"Ironically enough, the horrors of the Holocaust became the rationalization for the preparation by [Israeli] Zionists of acts of genocide against the indigenous people of Palestine. Those of us who, in the years that were to follow, raised our voices publicly against the violent apartheid of the Israeli state were vilified by the Zionist [pro-Israeli] press."
And on Israel's shameful relationship with Apartheid South Africa during the 1980s, Comrade Joe Slovo said: "It is ironic, too, that the Jew-haters in Apartheid South Africa – those who worked and prayed for a Hitler victory – have been linked in close embrace with the rulers of Israel in a new axis based on racism."
----------
As we celebrate comrade Joe Slovo we also recognize the growing number of Jews across the world, including those in Israel, who are supporting the Palestinian struggle against Israeli Apartheid and specifically backing the non-violent boycott, divestment and sanctions (BDS) against Israel campaign.