I remember some past dreams that reveal just how much the crucified life bears more fruit for the Man-child and Bride according to what Father is showing us in this dream above.
In the past, I had 2 dreams of me dressing David in a tuxedo. In these past dreams, David was dressed in tattered clothes, bloody and soiled, and brought to his knees by the faction attacks against him. As we will see, this is the wicked’s character assassination showing David in a false light. I had pulled out a black and white tuxedo to dress him in. But, in the dream above he is standing tall, washed and wearing a pure white tuxedo and completely dressed for the anointing and marriage feast. The factious enemies have been conquered and the righteous will shine forth in the kingdom of their Father.
I had also had a dream in the past of there only being a small container of cherries in David’s refrigerator, but also a larger container in the living room of fruit that was going bad representing those whose fruit was lost by falling away. But, in the dream above the refrigerator is so packed with ripe fruits and vegetables that there isn’t any more room.

“There is not much time left Eve. I am cleaning up My Body and cleaning out My church on a mass scale. (This we have seen very strong since 2011 as those fell away to serve their flesh and the Devil). 2019 is the year of Righteousness. I will have a spotless and blemishless Bride. The bad fruits will be tolerated no longer! They will be cast forth out of my house. (Please take heed to this word from the Lord)
Be careful. Make sure that you are found to be a good steward of the life and the gifts I’ve given you. Thou shalt worship the Lord your God and Him only will you serve! I require nothing less.
Repair the garments that I have bestowed upon you. Wash them, that they may be clean and perfected at My coming. Will you be found in faithfulness and readiness?”

Please Check out our new book  Faith for All Things  which will provide you a solid foundation of faith that will endure in these times!

This book can be ordered from Lulu Publishing. The price of the book is determined by Lulu and we have elected to take no portion of the profits. This is the only option for the latest print version until we order our own copies for free distribution. 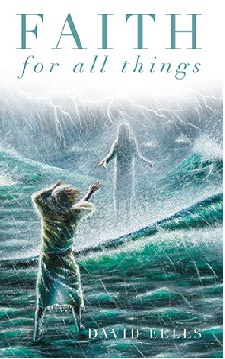 We have consolidated our Prayer Request/Elders contact email to one email Address Below, Please direct all requests to: