October 25 2013
IN THIS WOWW!
New pics shared on the WOWW-Pics Site
All pictures at the woww-pics site are downloadable
August 15 - Austin, Texas by Sheri Haltom
August 16 - Waco, Texas by Sheri Haltom
September 28 - Jackson, Michigan by Darlene Bakken Perez
Welcome to the Fan Zone Page
Janis Campbell, Connie Womack, Scott Wikle, Denny Wells, Julia Bellinger, Pam Mattingly, Russel & Rhoda Kelly
Notes on September with Wade on the road
September 11 Santa Ynez, California at the Ranch and Riata Roadhouse
This is the beginning of Wade’s three day California stand playing acoustic. The Ranch & Reatta Roadhouse in Santa Ynez is a small intimate venue, that plays very well for an acoustic artist. Managers of the venue were very taken with Wade and there was some conversation about future content concerts at other venues they own. Wade did a dozen of the songs that he had recorded plus Wichita lineman and a new one that he's been working on called Love Knew Better. Delightful show.
September 12 at Buck Owens Crystal Palace in Bakersfield California.

A sold out, enthusiastic crowd made for a lively evening. Again Wade performed songs that he had recorded, a variety from each of the albums that he has released. After Wade's acoustic set was finished, the house band played several songs. – they asked Wade  to come back onstage. He came striding out with a telecaster, one of buck Owens guitars. Wade did lead vocals and lead guitar on a couple songs that I haven't heard him do before. The new ones included Streets of Bakersfield, and Little Sister. He did several cover songs with the band, including Slide Off Your Satin Sheets, Silverwings, Make Up and Faded Blue Jeans, I Think I’ll Just Stay Here and Drink, and That’s the way Love Goes. I have been keeping records of how many different songs I've heard  Wade sing since 2009. The list is closing in on 140 different titles.
September 13 Sacramento California, Stoney Inn Rocking Rodeo
Again a full house - lots of music, lots of dancing and lots of good food. A great evening. Lots of dancers and you know how Wade loves to see the crowd dance when he plays. At this event, there was a VIP meet and greet before the show. Wade did several of the songs that he has released. Also performed Wichita lineman. And in recent shows he has been covering one from Alabama's catalog,  Old Flame. After performing one of his reality tunes, I’m Getting Too Old for This,  Wade commented -  "Don't bet on it. He’s not ready to retire and we don’t want him to. This evening at the Crystal Palace was very special.
September 18 at the Opry Backstage Grille.
This is another one of those Nashville venues where you find good music and good food. Wade was the guest artist/songwriter for Brassfield Aly, a new group that is establishing a strong fan base in Nashville and just recently signed a recording contract. The group is composed of the two Brassfield brothers, Chadley and Bradley and Aly Cutter. Aly is a member of Storme Warren's Nashville Navy. The "Navy" consists of those artists who have performed on the Travelin' Inc cruises or beach shows. Again, Wade was very well received by a full house.
September 23 in the Ford theater of the Country music Hall of fame. 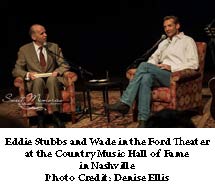 Once a month WSM a.m.'s well-known air personality, Eddie Stubbs, presents a program entitled  an Intimate Evening with Eddie Stubbs. These two hour shows are always delightful. Eddie is such a professional and is recognized nationally for his deep, deep knowledge of country music. Eddie introduced Wade with these comments. “He's an amazing man with a great voice, a fine songwriter and an amazing survivor." The format of these two hour shows includes an interview and a lots of music from the artist. During the commercial time for this radio show, the artist does meet and greet with the audience, row by row. Artists are given the opportunity to play live if they wish. Wade did several of his songs.
Fortunately, if you weren’t there, WSM-650 AM has archived the show.
http://www.wsmonline.com/watch-listen/intimateevening/
Social Media - Wade's Facebook Fan Page, Friend's Page and Twitter link
Wade's Facebook Fan Page
Wade's Facebook Friend's Page
Wade's Twitter Account

PLACE TO TURN AROUND, WADE'S NEWEST ALBUM
Wade has ordered more albums.
If you don't have this in your collection, you missed a real gem. ThatNashvilleSound.com listed it as one of its top 10 albums of 2009 - "the most underrated album of the year."
You can order MP3 downloads from iTunes and Amazon.com.
You can order an MP3 disc of the entire album from Amazon.com
Links to either or on this page:
http://www.wadehayes-woww.com/Music/placetoturnaroun.html
In their review - "With apologies to Yogi Berra, it’s time to rediscover Wade Hayes for the first time. Place To Turn Around is everything that is great about indie records. Imagine hanging around your favorite honkytonk bar and hearing an artist singing great neo-traditional country music with acoustic guitars, fiddle and steel and buying an album at the side of the stage following the performance. And then imagine that the artist you were listening wasn’t some unknown band, but a road-tested Nashville songwriter and musician with many hits under his belt. That is the experience of listening to Wade Hayes brand new album" ..  Read More
Two cuts from the McHayes Album have been added to iTunes and Amazon.com
Wade and Mark McClurg teamed together for a short time as the duo McHayes. Their album, Lessons in Lonely,  was not released to the public. (A shame, really, there was some great music on it.) iTunes and Amazon.com have added two cuts from that project. It Doesn't Mean I Don't Love You, written by Trent Willmon, has Wade singing the lead and Mark doing the high harmony. The Wrong Kind of Right has Mark singing the lead and Wade doing the harmony.
Video for Is It Already Time? has been posted
You may view it at this site.
Video for Is it Already Time?
Get the word out - use your facebook page, your twitter account, your e-mail to ask your friends to view this video. It's hard to imagine that there's anyone left in these United States who hasn't had a friend or a family member who's faced this situation. You can tell them, too, that from the beginning Wade's odds of making it were poor. Now he stands on the side of good health and is rebuilding his life and his career. Praise God!
The Links page is your source for finding pics, videos, reviews on other sites.
WadeHayes-WOWW.com Links Page
WEB SITES
Official Site
WOWW! Site
WOWW!-Pics Site
My Space
Facebook Fan Page
Facebook Friend's Page
For early Wade Hayes archives visit Cheryl Hill's site. We appreciate the time and expertise that Cheryl has contributed over the years to feature Wade.
Wade on the 2steppin site
BOOKING INFORMATION
Refer talent buyers to Wade's management
Mike Robertson Management
Phone: 615-329-4199
Fax: 615-329-3923
E-mail: assistant@mrmmusic.com
If you want to see Wade in your local area, ask your favorite venues to seek booking information.
Supplemental Booking - especially Texas
Mike McCary
mike@markchesnutt.com
If your venue is interested in booking Wade, an offer can be submitted at this site:
www.mccaryentertainment.com/wadehayes
ABOUT WOWW!
WOWW!, an e-mail newsletter to Wade Hayes fans, began in December, 1997. Subscribers reside in FIFTY (50) states as well as -
Australia, Brazil, Canada, Germany, Iraq, Ireland, Italy, Japan, Netherlands, Scotland, South Korea, Spain, Switzerland, New Zealand, Hong Kong.
WOWW! E-mail
Mailing Address:
WOWW! News / Helen Neal
P O Box 148274
Nashville, TN 37214
Messages for Wade can be sent to the same address. Mark ATTN: Wade Hayes
Wade has requested, "No presents, please."
Wade Hayes Appearance Details
October 24 - Cruising with the Alabama Band from Miami to Nassau
Alabama and Friends Festival at Sea
Miami to Nassau & Great Stirrup Cay
October 24 - 28, 2013
November 22 - Flagstaff, AZ - The Museum Club
Wade Hayes Acoustic
3404 East Route 66
Map
December 27 - Nashville, TN - Opryland Hotel - Ryman B3 Exhibit Hall
Wade Hayes Acoustic
Holly Jolly Town Square
Not So Silent Christmas - Concert Series
Scroll all the way down the page to find the link to get tickets for Wade's show. He's next to last on the series.
Map