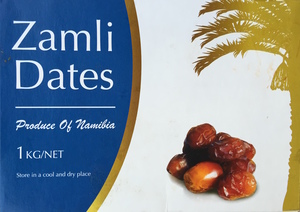 The Palestine solidarity and human rights organisation BDS South Africa together with our partner organisations including the Palestine Solidarity Alliance, Polokwane BD, Rustenburg PSF, Wits PSC and others have been alerted by members of the public to the issue of ZAMLI dates (pictured above). In particular we have received queries regarding information that the supplier has relations with Israel (buying, selling, cooperating with Israeli entities).

The first concern raised by members of the community is that the boxes do not have details or contact information of the supplier therefore violating local South African consumer rights, laws and labelling legislation. The allegation is that this is also an attempt to conceal certain information from the consumer.

The second concern raised is that the supplier has relations with Israel and in particular with the Israeli settlement company Mehadrin.

Reaching Out to the Distributors and Supplier
After several complaints and requests from members of the community for clarity, we reached out and made contact with the local South African distributors of the ZAMLI dates currently on the market. One of the distributors has indicated that the ZAMLI dates (pictured above) are being imported from Desert Fruits, a Namibian based company, but that Desert Fruit has in the past had relations with Israel - we are awaiting written confirmation as to whether Desert Fruit have ceased their Israeli relations or not.

In an email to the local distributors and the supplier (Desert Fruit) we asked whether the company has "any trade or economic relationship with any Israeli company, cooperative or entity. If this is the case, would you [as distributors] and the company (Desert Fruit) be able to confirm this in writing?”. We are still awaiting a response to this particular question. Any delay to this increases misinformation and suspicion.
The distributors, copying Desert Fruit, have only responded to say that they have visited the farms of Desert Fruit and that Desert Fruit have no Israeli investors. Unfortunately, this does not answer the question as whether Desert Fruit has any "trade or economic relationship with any Israeli company, cooperative or entity". In the interest of transparency with members of the community and to avoid misinformation, click here for a copy of correspondance.
The Calls for Boycott of Desert Fruit Zamli Dates
If Desert Fruit still has trade or economic relationships with any Israeli company, cooperative or entity (particularly Israeli settlement companies) this is in violation of the BDS boycott of Israel and would mean that a boycott of Desert Fruit ZAMLI dates as called for by some quarters is correct. If Desert Fruit or its local SA distributors, can confirm in writing that they do not have any Israeli relations then a boycott of the product would not be necessary.
Karsten Farms
A few years back Karsten Farms, a local South African distributor of dates, was the target of a successful consumer boycott due to its trade relations with an Israeli company, Hadiklaim. In January 2013, Karsten Farms, one of the largest agricultural companies based in the Northern Cape, provided a written undertaking via their lawyers indicating that they have terminated their relationship with Israel's Hadiklaim and that they will also not enter into any future relations with any Israeli entity complicit in the illegal Israeli Occupation of Palestine. The move by Karsten Farms to end its Israeli relationship with Hadiklaim was celebrated by human rights activists and brought an end to the boycott of Karsten Farms. We humbly call on Desert Fruit (and its local SA distributors) to follow suite, make a similar undertaking and put this issue to rest.
Moving Forward
We are currently investigating this matter further and will thereafter share more information. Thank you to all members of the public who have been in touch with us. Click here for more info.
ISSUED BY KWARA KEKANA ON BEHALF OF BDS SOUTH AFRICA