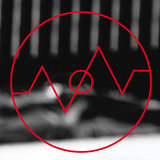 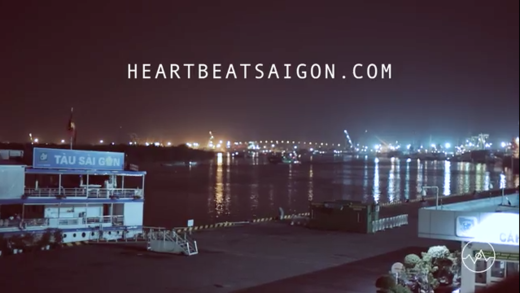 NEWS ► This June is time for the 4th collaboration with our friends of Goethe
in HCMC. This one came as a gift from Techno heaven.
The Bavarian Techno Machine, known for his releases on Cocoon, his unwavered
signature sound as well as a long time star at the techno firmament in Germany.
This night booth will appear like the cockpit of a spaceship with a spectacular
live performance from Mr. Alex Bau and a nice closing set to welcome the sun by
Javier Marimon, joining Heart Beat for the first time
► Read more below!
NEWS ►This July is time for James Shaw. When you say: “Shifted", you have to say:
“SIGHA”! So we are excited to announce, it is finally time for us to say: “Sigha”!
James Shaw will headline the 27th installment of Heart Beat and everything
just falls into place after Shifted, Henning Baer, Antigone and the likes. Our July
instalment will be supported by 1DAN and of course founding father Chris Wolter.
NEWS ►23 + 24 November in cooperation with Insutute Français HCMC and
European Music Festival; Voiski will have a back to back performance in HCMC.
On Nov 23rd a live set from Voiski at the Conservatory of HCMC and on Nov. 24th
you can expect a magnifcient DJ set @ the Observatory.  Something very unique!
So block your schedules in the evening of this 3rd week of November! 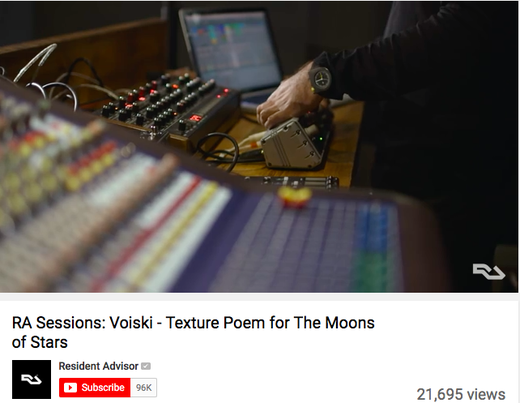 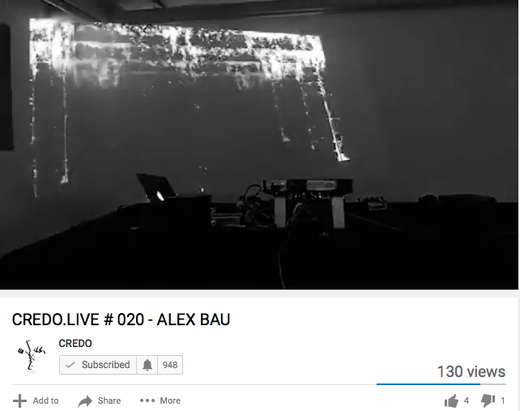 Alex Bau also known as “The Bavarian Techno Machine” brings firepower
and versatility to his productions and DJ sets that has seen his electrified
tracks appear on labels such as Sven Väth’s Cocoon, Chris Liebing’s CLR,
The Advent’s Kombination Research, Hans Bouffmyhre’s Sleaze and his
very own Credo imprint amongst others. His live recording show his
unwavering style that includes elements of hypnotic tension, energetic acid
and driving rhythms
when did your"love Affair" with electronic Music begin?
when you got consumed by the techno scene?
On my first contact to techno I actually hated it, that must have been
new years eve 1991 I think, but I soon realized that I simply ended up on
the wrong party. The next technoparties I visited were just great, I felt
that there is something new coming up. And when I was at my first party
with Sven Väth in Munich in 1992 I was catched. That was an ignition.
What was one of your best gigs of the past 12 months Puhh... I´m lucky
enough to be able to tell that this is really hard to answer and also unfair to pick
only one because there were so many gigs with an amazing vibe. But ok, if I have
to pick one let`s say the CREDO.TEN showcase at Under Club in Buenos Aires
where I played a 10 hours set. The club actually opened extra early at 21:00 so
that I was able to do this 10 hours set, and the vibe, the energy throughout the
complete night was not from this planet. It was so emotional when I played the
last track at 7:00 am in the morning. Incredible! 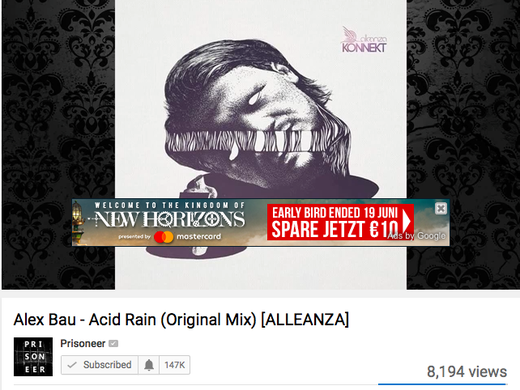 Is it your first time and gig in Vietnam?
Yes, it is. And I am super excited about it! True words.
What is your expectation with your visit to Vietnam and is there something you
would like to see, eat or try when you are here Hm, I have to admit that I have
no real imagination of the country. I just know about the major cities of course
and some friends have been there for holidays and it must have been really
beautiful. And they said Saigon is a super busy and hectic city. Let`s see.
According to Alex Bau what is there that you find (only) in electronic music,
specifically Techno, that you think you can’t find in other genres of music.
It´s the idea of infiltrating minds with a subtile, even subversive approach.
On a superficial view it sounds all the same, but once you get into the vibe
and rythm it`s almost transcendental. 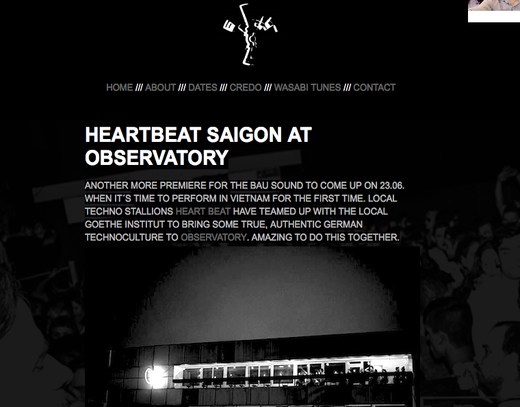 Did you hear from befriended artist what it is like playing in Vietnam, with
Heart Beat, at the Observatory
No, I´m coming over totally free of any idea what to expect.
And that`s what I like. I can see on the internet that Heart Beat obviously
understands the idea of techno and also my approach to fit perfectly and
The Observatory seems to do interesting bookings.

Congrats on your 10 year anniversary in 2017 of your own label Credo.
What artist (s) would you like to see release on Credo the coming 10 Years
There is no kind of "wishlist" for the label because I always put the music itself
in focus. If I receive a demo from a totally new, unknown artist and it`s great,
I will release it. Just like I did with many before.
At the same time, if an established artist sends me a demo and the name is
big and would carry huge attention to the label, but the music is just "so so",
I wouldn`t do it. The only thing which is important to me in terms of artist
relation is loyalty. And honestly, there are a lot of just selfish and
opportunistic artists out there. They smile at you and once you turn they
stab you in the back if they see any profit / progress out of it.
To use the words of Metallica: sad but true! 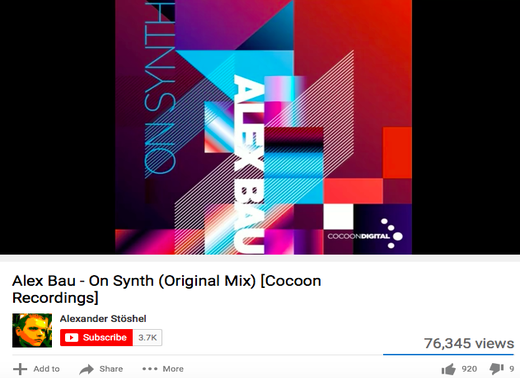 One of your last productions is on Hans Bouffmyhre's 2-part Insurgency EP
on his Sleaze label. Also featuring versions by Pfirter, Keith Carnal.
Now We were wondering can we see a new album by Alex Bau After the MUSICK
(April 2015) coming up and when and where would this see the light of day
Oh, this remix is already kind of "old". My last album "MUSICK" was released
in 2015, then I did some EP`s on CREDO and Cocoon as you might know too
plus some remixes and collaborations. Maybe there will be a new album next
year. I already work on some ideas, but it`s too early to say anything about
dates. Unfortunately the time on ths studio is limited due to a lot of office work
to do for the label. 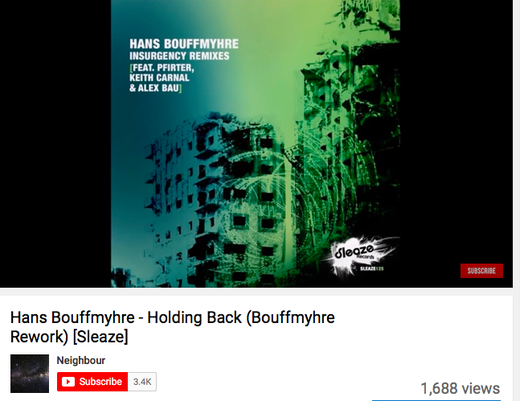 What is one of your favourite all time productions and what is one of your
favourite productions you are now listening to frequently
Hm... there are some artists I really admire and adore. Like Martin L. Gore
or also Hans Zimmer. But there is a lot of good music out in the cosmos,
hard to pick "the one" that beats all. An all time fav album of mine is
"Songs from the big chair" by Tears for Fears back from the 80ies.
A decade I generally really love for its transition towards electronic sound.
I also like nice ambient productions for listening to on tour while travelling
for example.
In terms of techno I currently play a lot from Tensal or Architectural.
But again, these are just two out of countless good producers out there 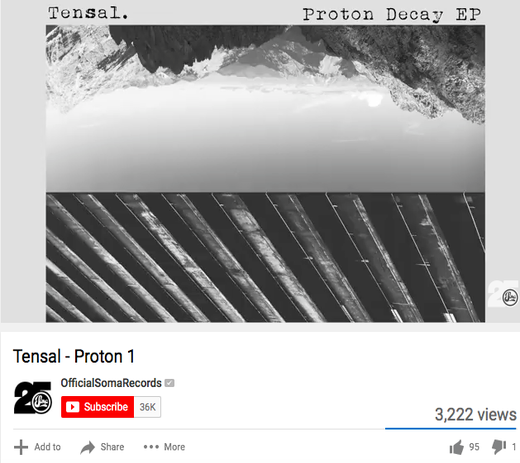 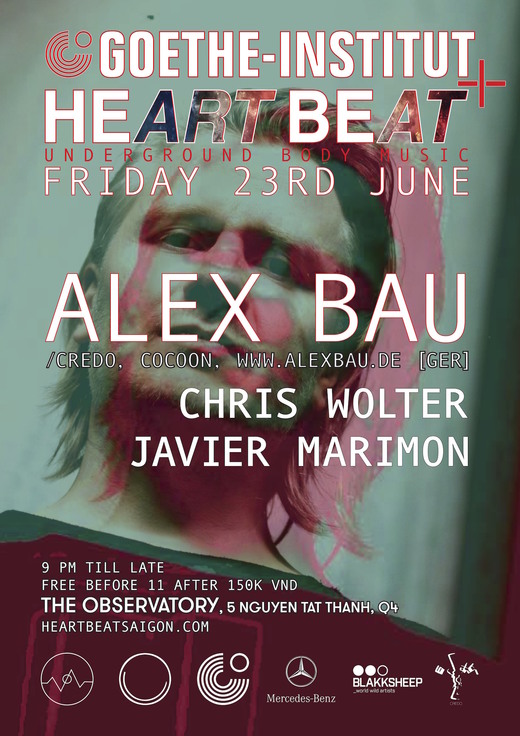