PRESS STATEMENT
The passing away of a Mother 💔 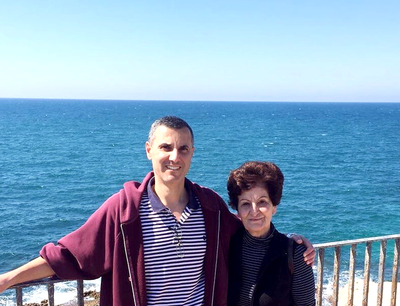 In a moving, personal and powerful message, titled “on loss and faith,” Comrade Omar writes:
"Today, I experienced a personal Nakba (catastrophe). I am rarely broken, but today I am....[my mother was] a feminist, an avid reader of literature and politics, an incredible cook, an unwavering supporter of popular struggles the world over against all forms of injustice, a moderate addict of Facebook (much less so of Twitter), a fan of the BDS-supporting Jewish Voice for Peace (US), a cleanliness freak, and an exceptional care giver with the biggest heart possible. That heart stopped today, for the last time."  (Below find Cde Omar Barghouti's full letter on the passing of his mother).

Before Israel imposed a travel ban on him, Comrade Omar had previously travelled to South Africa, where he met with several Government Ministers, MPs and other officials. Last year, at its 14th National Congress, the SACP conferred a special recognition award to Barghouti. We and fellow South African activists know comrade Omar personally, and as a stalwart in the struggle for justice for all Palestinians. We now learn (through his letter, found below) that he comes from a family of resistance against oppression and determination to secure their liberation.
Like many of the heroes of our own struggle against apartheid, who did not live to see the end of Apartheid in South Africa, Omar's mother Wafieh Barghouthi, left this world without seeing the end of Israeli apartheid. She was a fighter, a resister, never a victim. Our hearts go out to Comrade Omar at the loss of his mother. It is never easy to lose a mother, and if there is one common expression that is utterly untrue in relation to the loss of a mother, then, it is that “time heals all wounds”.
In addition to our sadness at this deep personal loss, is our anger that the Israeli Apartheid regime prevented Comrade Omar the simple decency to visit his mother during her last days (in her fight against cancer, click here). Futhermore, stooping to a level of utter cruetly, Israel is now also denying Cde Omar permission to attend his mother's funeral in Amman. He writes: "They are trying to punish me for my role as a human rights defender in the BDS movement for Palestinian rights. They think they will break me or deter me. Little do they know that this branch comes from that tree, and that tree has its strong roots deep in the fertile ground of Palestinian identity, Palestinian quest for justice and freedom, Palestinian resistance and Palestinian insistence on life that is worth living."

There seems no limit to the indecency of the Israeli regime. Time and time again, Israel pushes the boundaries of the cruelty that they are capable of inflicting on the Palestinian people - a people who desire nothing but freedom and justice.
We are moved but not surprised at the deep love expressed by Comrade Omar in his letter below, for love is what lies at the heart of our struggle for freedom - a love for people (all people), for freedom and justice. It is this love that inspires and drives us in our solidarity with Cde Omar, the Palestinian people struggling against Israeli apartheid and all oppressed peoples of the world.
Hamba Kahle, Comrade Wafieh! Go well, mother. Rest, for you have done your part. Your son, will pick up the spear and we will fight along with him and all the Palestinian people along with all those in solidarity with them – Jew, Christian Muslim, non-religious people – everyone who dreams of a world wherein children (including Palestinian children) are free to be children.
Our deepest love from South Africa goes out to you and your family, dear Comrade Omar.
ON LOSS AND FAITH
- Letter by Omar Barghouti on the passing away of his mother, Wafieh (14 September 2018)