SAJFP MEDIA STATEMENT
South African Jews welcome downgrading of SA Embassy in Israel
(06 July 2017)
We as Jewish South Africans warmly welcome the ANC National Policy Conference resolution and recommendation to downgrade the South African Embassy in Tel Aviv. This is a concrete step beyond rhetoric. Israel must be held accountable for its crimes against the Palestinian people and a clear message must be sent that there are no normal relations with an abnormal regime.
The ANC National Policy Conference, which ended yesterday, has called for "the downgrading of the SA Embassy in Israel to send a strong message about Israel’s continued illegal occupation of Palestine and the continued human rights abuses against the peoples of Palestine”.
https://mg.co.za/article/2017-07-05-anc-to-downgrade-south-african-embassy-in-israel
We would like to draw attention to the letter that our Jewish Israeli counterparts sent to the ANC ahead of its recent National Policy Conference. In their letter supporting the call for a downgrade of relations and support of the BDS boycott of Israel, our Israeli friends explained that:
"After many years of trying to change our society from within, we have come to the conclusion that an international campaign, such as the boycott against apartheid South Africa, is necessary to change the situation here. We believe that the time has come for further measures. Governments including the South African government should be downgrading diplomatic relations and their embassies in Israel, to send a clear message to Israel that its violations of international law are unacceptable. Ultimately we call on the ANC to strengthen its support for the BDS movement and Palestinian struggle." http://boycottisrael.info/node/302
We welcome the fact that the ANC has heeded the call by Palestinians as well as those progressive Israelis who are working towards a just peace in Israel-Palestine.
Finally we would like to add that we stand against all forms of racism and antisemitism and for the freedom, dignity and full human rights of all. To boycott Israel today is not antisemitic, it is an affirmation of these principles.
For more information please contact:
Allan Horwitz 0825128188
*South African Jews for a Free Palestine (SAJFP) is an organisation of South African Jews wishing to see a just resolution to the conflict in Historic Palestine. We strongly believe in the Jewish concept of Tikkun Olam, “Repairing the World” which embodies social action and the pursuit of social justice. Historically Jews have been involved struggles to achieve social justice and we are proud to continue this tradition. Furthermore, as Jews, we feel obliged to speak out against injustice purportedly carried out in our name. 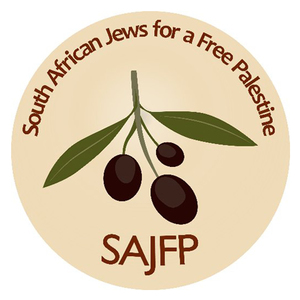