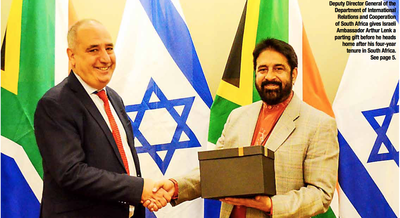 DIRCO's Anil Sooklal gives a gift to the Israeli Ambassador
21 September 2017 | https://tinyurl.com/ybkdthyk
The human rights and Palestine solidarity organisation BDS South Africa is shocked by a recent and blatant insult of South African policy and our people by an official at South Africa's Department of International Relations and Cooperation (DIRCO).
Anil Sooklal, an official at DIRCO, is reported to have given Israeli Ambassador Arthur Lenk a “good-bye" present from South Africa (click here). This act by Sooklal is an insult to peace and justice loving South Africans and is contrary to the wishes of our people. Indicative of the South African peoples pulse is that the largest protest since the dawn of democracy was the Palestine solidarity and BDS protest in 2014 on the streets of Cape Town (click here).
Apartheid South Africa had shameful relations with Israel during the 1980s but the new government under the ANC has continually reviewed its relations with Israel in light of Israel's increased illegal occupation and oppression of the Palestinian people. In 2014 South Africa's governing party’s NEC took a decision to join the "call for a cultural, academic and education boycott of Israel including travel bans for members and leaders of the ANC, the Alliance, Members of Cabinet, Members of Parliament and Government Officials” (click here). In addition, in both the 2016 and 2017 January 8th statements, South African President Jacob Zuma warned against travel to the State of Israel (click here). DIRCO is insulting the people of South Africa as well as the ruling party's members, resolutions, directives and policies (click here). This is even more insulting given that the Israeli embassy, earlier this year, in an unprecedented attack, issued a statement against the ANC falsely accusing the party of being anti-semitic (click here to read the statement).
Furthermore, Minister of International Relations, Maite Nkoana-Mashabane has said: “Palestinians have asked us in formal meetings to not engage with the [Israeli] regime…we have [therefore] agreed to slow down and curtail senior leadership contact with that regime until things begin to look better.” (click here). Sooklal, and DIRCO, are under no obligation to award and cozy-up to the Israeli Ambassador nor to grant a gift to Israel and the Israeli Embassy in the name of South Africans, particularly given Israeli violations of international law, its illegal settlements and unlawful occupation - all of which South Africa vehemently opposes.
This is not the first time DIRCO officials have insulted South Africans and sadly DIRCO is not taking action against officials who contradict South African policy. Previously the former DIRCO DG, and now SA Ambassador to the UN, Jerry Matjila, met with Israel's DG in an attempt to normalise relations with the oppresive Israeli regime. Later the South African Ambassador to Israel, Sisa Ngombane, spoke of "pressuring" President Jacob Zuma and the SA government "to send ministers to Israel" as well as infamously claimed that Israel was justified in its attack on the Palestinian Gaza strip. International Relations Deputy Minister Luwellyn Landers reccommended to Parliament that DIRCO recalls Ngombane but this is yet to materialise (click here).
The Middle East desk and division within DIRCO, which Sooklal is part of, it would seem, has become highly unprincipled. In fact, we have it on good record that certain officials at DIRCO including an Ambassador who is a Special Advisor in the Office of the Minister are actively working to prevent a resolution by the governing party for the downgrade of the SA Embassy in Israel (click here).
We are aware that DIRCO officials dismiss civil society, refer to the ANC as “just another NGO” and consider the Palestine solidarity and BDS movement as “noises on the streets.” However, we remind such individuals that noises on the streets are an expression of the will of our people that should not be taken for granted. The human rights and Palestine solidarity organization BDS South Africa has again written to DIRCO demanding a meeting regarding those who are captured by Israel working within the midst of the Department. In addition we will be convening a meeting with other civil society partners to take forward the need to protest at DRICO’s head office in Pretoria. Details will be released in due course.
These insults to our people, our solidarity and to Palestinian people, will not be tolerated. DIRCO officials walking a pro-Israel line lay bare not just the growing gap between our people and DIRCO but also the arrogance of DIRCO which it would seem is arrogantly disrespecting civil society and the people of South Africa - this disrespect will have consequences.