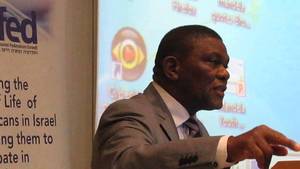 South Africa’s Ambassador to Tel Aviv, Sisa Ngombane, at a press conference broadcast live from OR Tambo International Airport to welcome human rights activist, Leigh Ann Naidoo, conducted himself in a deeply disrespectful, imposing, unprofessional and exceptionally distasteful manner ("SA Ambassador to Israel loses the Plot", 7 October 2016).
Naidoo, along with 12 other women, were en route to the Israeli blockaded Palestinian Gaza Strip when their boat was unlawfully intercepted by Israel. They were subsequently detained and deported.
The human rights and Palestine solidarity organization BDS South Africa is, together with other activists, shocked by the conduct of Ngombane. We are even more concerned by the biased pro-Israeli views expressed by Ngombane.
Among other comments, Ngombane asserted at the press conference that Palestinians were to blame for Israel’s attacks on Gaza in 2014 (where, according to the UN, over 2500 Palestinians including more than 550 children were killed). This is, as others have pointed out already, not only unfounded, but at odds with the official position of the South African government and the governing party.
----------
Ngombane has frequently contradicted both ANC resolutions and Government policies. We have received several reports increasingly suggesting that Ngombane has become an advocate for normalising relations, especially trade, with Israel. He has previously said: “it is important for the two governments [Israel and South Africa] to establish a pattern of meeting and talking so that they can find avenues of common ground outside the heated political arena. Trade is one of those avenues.” (Jerusalem Post, 26 March 2016)
Ambassador Ngombane has also belittled South African civil society saying that: “The South African street might be strongly pro-Palestinian, but its calls against Israel have nothing to do with government policy”. (Jerusalem Post, 26 March 2016)
Furthermore, Ambassador Ngombane is at odds with  South African Government policy of no travel to Israel for SA Government officials. President Jacob Zuma reminded political leaders earlier this year that: “We reiterate that we discourage travel to Israel for ANC leaders, members and representatives for business and leisure purposes”. (http://tinyurl.com/jemqan9)

In clear contradiction, Ambassador Ngombane speaking to the Times of Israel said: “I’m hoping that the President [Jacob Zuma] will feel in his second term that he needs to see ways how to engage, not from afar, not from a distance.” He also went on to explain that his Embassy has “a lot of plans for visits,” and was exerting “pressure” on Pretoria to send ministers to Israel.”
Ngombane is also alleged to not have assisted the Womens Boat to Gaza's Leigh Ann Naidoo with consular services, assistance and intervention when she was detained by Israel ("WBGSA calls for AMB Ngombane to be recalled", 9 October 2016). This is not the first time that the South African Embassy in Israel, under Ngombane, has not provided consular assistance to South African citizens and activists. Previously a pro-Palestinian church activist has also alleged that Ngombane did not come to his assistance when the activist was detained, interrogated and then deported by Israel.
Finally, Ngombane seems to celebrate a relationship with TelFed inviting the organization for various events, meetings and engagements as well as attending events and programs of TelFed. TelFed is the Israeli arm of the South Africa Zionist Federation that was established in 1948 even before the State of Israel was declared and was part of the ethnic cleansing of Palestinian villages during the Nakba. TelFed, through the SA Zionist Federation, was even involved in flying military supplies to Israel during this period (http://www.telfed.org.il/node/31).

TelFed today boasts of its support for Southern Africans serving in the Israeli Defence Forces, on its website it states: "Do you know that every year there are between 35-50 ‘lone soldiers’ from Southern Africa volunteering in the Israeli army at any given time? [...] Telfed keeps a protective eye on Southern African ‘lone soldiers’ and where possible matches them up with families in Israel to host and provide them with a “home from home”." South Africans serving in foreign armies violates various South African regulations. Organizations that support such mercenary activities should not be celebrated or endorsed by South African Government officials.
ISSUED BY KWARA KEKANA ON BEHALF OF BDS SOUTH AFRICA
For comment: 0842119988
BOYCOTT, DIVESTMENT AND SANCTIONS AGAINST ISRAEL IN SOUTH AFRICA (BDS SOUTH AFRICA)
5th Floor | Mishumo House | 77 De Korte Street | Braamfontein | Johannesburg
PO Box 2318 | Houghton | 2041 | Johannesburg
T: +27 (0) 11 403 2097 | F: +27 (0) 86 650 4836
W: www.bdssouthafrica.com | E: media@bdssouthafrica.com
www.facebook.com/bdssouthafrica | www.twitter.com/bdssouthafrica | www.instagram.com/bdssouthafrica