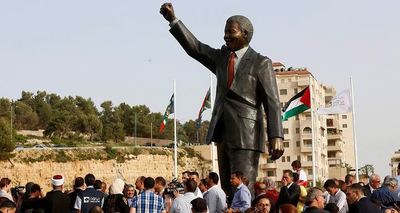 A newspaper article published over the weekend (Friday 11 November) indicated that Mashaba on behalf of Johannesburg is now reconsidering its links with the Palestinian city of Ramallah (click here for the news article).

Relations between one of South Africa’s largest cities and Palestine were forged between 2014 and 2015 under former ANC Mayor, Parks Tau (click here).

Instead of proving their critics wrong, South Africa's opposition party, the DA, has done exactly the opposite. In August already ANC Regional Secretary Dada Morero warned that: "Under our [ANC] leadership, we signed an MOU agreement between the City of Johannesburg and the Palestinian city of Ramallah. We also donated a statute of President Nelson Mandela to our Palestinian counterparts which our then Mayor Tau Parks inaugurated earlier this year. This very MOU with Palestine’s Ramallah and solidarity with the Palestinian people may now be in jeopardy under the DA; in addition, our fear extends to other progressive pro-poor policies that were put in place in the last decade now being reversed by the DA.” Morero had also exposed how Mashaba appointed a pro-Israeli sympathizer, Rabelani Dagada, as his MMC for Finance (click here for the full article.)

As South Africans and those involved in international solidarity efforts we are shocked that Herman Mashaba used an important South African Government hosted visit of a high level Palestinian delegation to indicate, at this early stage, his intention to review Johannesburg's Palestine agreement. We hope that despite the pressure of the Israeli lobby that he will rethink his current anti-Palestine approach.