May 5, 2016
Back issues of WOWW! are archived at WOWW! Archives
IN THIS WOWW!
New Feature - Words from Wade
Special Dates -
Register for the Fan Club Breakfast  on 6/10/2016
Register/Support TEAM WADE in the  UNDY 5K on 8/6/2016
Look for the release of Country Faith Hymns coming out 5/6/2016
On the Net - Link additions
Wade Appearances
For appearance details, go to the Tour page of wadehayes-woww.com. You'll even get a map link that will guide you to a venue when you enter your own starting point.
Words from Wade
I slowed him down long enough for him to respond to a couple of questions. He says, and I believe him, that he'd probably go crazy if he had any free time.
Question 1: Country Faith Hymns, 3rd edition is coming out Friday, May 6th. It will be offered online and at each Cracker Barrel Store.  Tell us about your involvement.
"I am really excited to be part of that project. Deborah Evans Price actually got me involved with it. I recorded 'Just As I Am,' just with Megan (Mullins) and me. We did everything on it.  She played accordion and fiddle and I played bass and both the guitars. It really turned out pretty slick. It’s a really exciting project and it has a bunch of great artists on it. It’s got the likes of Alan Jackson and Merle Haggard. Those are the ones that stood out to me. I’m honored that they even considered me to be part of it. It’s a big deal to me."
Question 2: What’s keeping you busy these days?
"I’ve been working on this house, trying to get ready to sell it and buy this other place I’ve got my eye on.  Things are going well with that. I’ve spent the morning working on bookings and travel plans, planes, rental cars…. It’s a lot, but it’s the life I chose. Touring dates are coming in daily. I’m very thankful that I have the work. And writing songs. We’ve got a pretty good record together. We’ve got some good stuff down and written. I’m really excited about it. We’re recording on May 24th, the first 6 or 7. I plan to do some new stuff at the fan party. Hopefully we can play the record, but I don’t think the art work will be ready for us to have the CD there."
About the Country Faith Hymns, Vol 3 - Remarks from Deborah Evans Price, one of the producers
"We are thrilled to be partnering with Word Entertainment/Curb Records to bring these treasured hymns to the world. I’m especially excited about Wade Hayes’ new recording of ‘Just As I Am.’ I’ve been a fan of Wade’s for a long time and am so grateful he’s sharing this song with us. It moves me every time I listen.”
Artists included on the 10 tracks are:
Willie Nelson; Johnny Cash; Randy Travis; Alan Jackson; Brad Paisley; Hank Williams; Wade Hayes; Gene Watson; Amy Grant; Vince Gill; George Jones; Collin Raye and Dolly Parton with Linda Ronstadt and Emmy Lou Harris. There is a 12 track version being distributed at Cracker Barrel that includes Trace Adkins and B. J. Thomas.
Wade with Deborah Evans Price 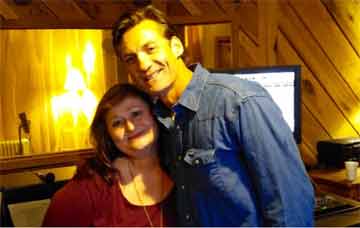 ON THE 'NET
Wade and Kevin Sport taping the interview and performance on The Right Place with Kevin Sport. The first 30 minutes has been released as TRP 411 on YouTube. 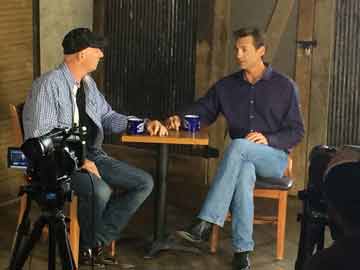 Find links to all of the above at
http://www.wadehayes-woww.com/wadehayeslinksan.html
WOWW-Pics Site is down temporarily. I have to locate it to a new server.
http://www.woww-pics.com
FAN HELP IN PROMOTING WADE
GUIDELINES FOR USE OF WADE'S MATERIAL - pic, name, logo, signature
GUIDELINES FOR USE OF HIS MATERIAL - pic, name, logo, signature

Social Media -
Official Site
WOWW! Site  -Official Fans Site
Wade's Facebook Music Page
Wade's Facebook Friend's Page
Wade's Twitter Account
Wade's Most Recent Videos
Video for Is it Already Time?
Get the word out - use your facebook page, your twitter account, your e-mail to ask your friends to view this video. It's hard to imagine that there's anyone left in these United States who hasn't had a friend or a family member who's faced this situation. You can tell them, too, that from the beginning Wade's odds of making it were poor. Now he stands on the side of good health and is rebuilding his life and his career. Praise God!
Video for Go Live Your Life
What an anthem for for making the most of this short, precious life on earth. Wade nailed it. It's an anthem to live by.  Go Download!
The Links page is your source for finding pics, videos, reviews on other sites.
WadeHayes-WOWW.com Links Page
WEB SITES
Official Site
WOWW! Site -Official Fans Site
WOWW!-Pics Site
Facebook Fan Page
Facebook Friend's Page
BOOKING INFORMATION
Refer talent buyers to Wade's management
Mike Robertson Management
Phone: 615-329-4199
Fax: 615-329-3923
E-mail: assistant@mrmmusic.com
If you want to see Wade in your local area, ask your favorite venues to seek booking information.
Supplemental Booking - especially Texas
Mike McCary
mike@markchesnutt.com
If your venue is interested in booking Wade, an offer can be submitted at this site:
www.mccaryentertainment.com/wadehayes
ABOUT WOWW!
WOWW!, an e-mail newsletter to Wade Hayes fans, began in December, 1997. Subscribers reside in FIFTY (50) states as well as -
Australia, Brazil, Canada, England, Germany, Iraq, Ireland, Italy, Japan, Netherlands, Scotland, South Korea, Spain, Switzerland, New Zealand, Hong Kong.
WOWW! E-mail
Mailing Address:
WOWW! News / Helen Neal
P O Box 148274
Nashville, TN 37214
Messages for Wade can be sent to the same address. Mark ATTN: Wade Hayes
Wade has requested, "No presents, please."
Wade Hayes Appearance Details
http://www.wadehayes-woww.com/wadehayestour.html
Check with venues before travelling.