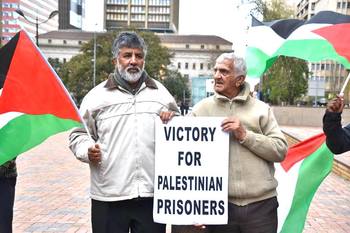 08 December 2017 | http://goo.gl/aBTPoZ
The human rights and Palestine solidarity organisation BDS South Africa joins fellow South Africans in mourning the loss of comrade Laloo Issu Chiba.
During the struggle against Apartheid Chiba was a member of the armed wing of the African National Congress (ANC), the uMkhonto we Sizwe. For his invovlement in the struggle he was sentenced to 18 years imprisonment on Robben Island in the Little Rivonia Trial. He was jailed in B-Section, alongside Nelson Mandela, Walter Sisulu, Ahmed Kathrada and others.
Chiba was a strong supporter of the Palestinian struggle against Israeli Apartheid and the BDS boycott of Israel movement. He was a familiar face at several Palestine solidarity protests and was, of course, one of the participants in the recent 24 hour fast in solidarity with Palestinian political prisoners that saw over 25 South African government Ministers join in as well.
Comrade uncle Laloo Issu Chiba was a beautiful, gentle and militantly-principled human being - an unassuming giant of our time.
We send our sincere condolences to Chiba’s wife, Luxmi, his three daughters and grandchildren as well as his activist family and friends, in the main, supporters, staff and board members of the AKF.
ISSUED BY KWARA KEKANA ON BEHALF OF BDS SOUTH AFRICA