June 1, 2013
IN THIS WOWW!
June 7, Fri - Wade Hayes Friends Fest - 8 am SOLD OUT
June 7, Fri - 2:30 pm Wade in the Durango Room at Music City Center, Nashville's new Convention Center
Subscriber Extra
If you missed hearing the Station Inn Session with Wade and air personality Mike Terry (or if you'd just like to hear it again, I have joined the 17 minute audio with the 57 minute show.
Station Inn Session
Notes on Lanham Brothers Jamboree
The Lanham Brothers Jamboree is family friendly and lots of fun. Each year, as the word spreads,  the comfortable theatre at Diamond Lakes Resort holds a larger audience. Skits, dancers and outstanding musical talent are the hallmark of the show.  Wade had 2 segments of the show featuring him and his guitar on songs that he'd recorded. Wade also did a game show type event - he played the intro to a song on the guitar and 3 couples were vying to see who could sing the next line. 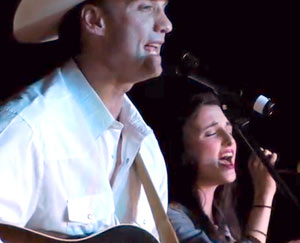 PLACE TO TURN AROUND, WADE'S NEWEST ALBUM
Wade has ordered more albums.
If you don't have this in your collection, you missed a real gem. ThatNashvilleSound.com listed it as one of its top 10 albums of 2009 - "the most underrated album of the year."
You can order MP3 downloads from iTunes and Amazon.com.
You can order an MP3 disc of the entire album from Amazon.com
Links to either or on this page:
http://www.wadehayes-woww.com/Music/placetoturnaroun.html
In their review - "With apologies to Yogi Berra, it’s time to rediscover Wade Hayes for the first time. Place To Turn Around is everything that is great about indie records. Imagine hanging around your favorite honkytonk bar and hearing an artist singing great neo-traditional country music with acoustic guitars, fiddle and steel and buying an album at the side of the stage following the performance. And then imagine that the artist you were listening wasn’t some unknown band, but a road-tested Nashville songwriter and musician with many hits under his belt. That is the experience of listening to Wade Hayes brand new album" ..  Read More
Two cuts from the McHayes Album have been added to iTunes and Amazon.com
Wade and Mark McClurg teamed together for a short time as the duo McHayes. Their album, Lessons in Lonely,  was not released to the public. (A shame, really, there was some great music on it.) iTunes and Amazon.com have added two cuts from that project. It Doesn't Mean I Don't Love You, written by Trent Willmon, has Wade singing the lead and Mark doing the high harmony. The Wrong Kind of Right has Mark singing the lead and Wade doing the harmony.
Video for Is It Already Time? has been posted
You may view it at this site.
Video for Is it Already Time?
Get the word out - use your facebook page, your twitter account, your e-mail to ask your friends to view this video. It's hard to imagine that there's anyone left in these United States who hasn't had a friend or a family member who's faced this situation. You can tell them, too, that from the beginning Wade's odds of making it were poor. Now he stands on the side of good health and is rebuilding his life and his career. Praise God!
The Links page is your source for finding pics, videos, reviews on other sites.
WadeHayes-WOWW.com Links Page
WEB SITES
Official Site
WOWW! Site
WOWW!-Pics Site
My Space
Facebook Fan Page
Facebook Friend's Page
For early Wade Hayes archives visit Cheryl Hill's site. We appreciate the time and expertise that Cheryl has contributed over the years to feature Wade.
Wade on the 2steppin site
BOOKING INFORMATION
Refer talent buyers to Wade's management
Mike Robertson Management
Phone: 615-329-4199
Fax: 615-329-3923
E-mail: assistant@mrmmusic.com
If you want to see Wade in your local area, ask your favorite venues to seek booking information.
Supplemental Booking - especially Texas
Mike McCary
mike@markchesnutt.com
If your venue is interested in booking Wade, an offer can be submitted at this site:
www.mccaryentertainment.com/wadehayes
ABOUT WOWW!
WOWW!, an e-mail newsletter to Wade Hayes fans, began in December, 1997. Subscribers reside in FIFTY (50) states as well as -
Australia, Brazil, Canada, Germany, Iraq, Ireland, Italy, Japan, Netherlands, Scotland, South Korea, Spain, Switzerland, New Zealand, Hong Kong.
WOWW! E-mail
Mailing Address:
WOWW! News / Helen Neal
P O Box 148274
Nashville, TN 37214
Messages for Wade can be sent to the same address. Mark ATTN: Wade Hayes
Wade has requested, "No presents, please."
Wade Hayes Appearance Details

Wade on the first session this year - the 5 PM slot - He has a private show to do later in the evening.

I don't know yet if we're going to be able to accomodate a meet and greet session. He has new pictures. He will bring them to the fan breakfast.

Check with venues before travelling.