February 3, 2015
Back issues of WOWW! are archived at WOWW! Archives
IN THIS WOWW!
ON THE 'NET
The Pledge Campaign
Wade not only participated in No Shave November, a benefit for St. Judes Children's Hospital, sponsored by WSM-650 AM, HE WON IT
Thanks, Rita Vincent Sanchez, for this pic from Dosey Doe's. He does "grizzled" very well. 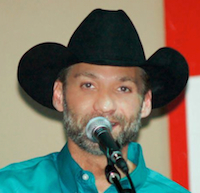 ON THE 'NET
You Tube Addition - How Great Thou Art
Jenny Beth Willis with Wade Hayes singing How Great Thou Art live on The Lanham Brothers Jamboree in Owensboro, KY. Joined by Randy Lanham on fiddle and harmonies, and Chris Armstrong on Guitar. Wade is marvelous with singing harmonies with others (and even more so when he's recording and singing his own harmonies).  In fact, when he first came to Nashville, his goal was to be a lead guitarist and harmony singer. 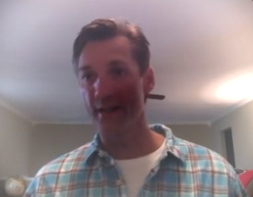 upcoming Concerts In Branson show on February 14 at The Star, his career, health and new music.  WadeHayes will be joined in Branson by Mark Wills and Bryan White for two shows…but ONE DAY ONLY!  Click here to get your tickets."  or call 844-677-0541
To see the interview, click here.
The Beauty of Music Interview
http://thebeautyofmusic.com / 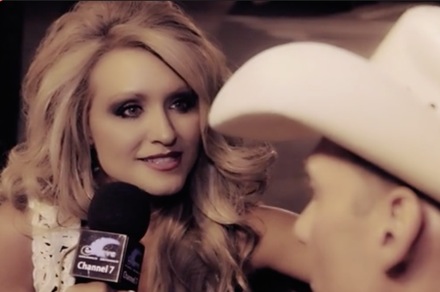 This 20 minute interview was screened in June of 2013. It's a good video. Realize that at the time Wade was taking chemo for his second go-round of cancer. He'd had a treatment the week before this was shot and again the week after before undergoing another surgery in mid-July.
Updates to the WadeHayes-WOWW site
Fan Zone - Welcome to Fan Zone: Diane Ayers, Kelly Kane, Laney Peerson, Donna Elliott, Sherry McQuerry Gardner, Sara Perry, Branson McDonald
Gallery Page - The Courage Tour
Updates to the WOWW-Pics site
The Courage Tour (Idaho) and Johnetta's Pub 1/31/15
A PERSONAL NOTE
~ Helen
NOTES AND REVIEWS
The Courage Tour
Coeur d'Alene, ID - Kootenai County Fairgrounds - November 18, 2014
Johnetta's Pub - Bowling Green, KY - January 31, 2015
We had a great time. It's a very comfortable venue. And what a supportive crowd! Randy Lanham and Wade make for a great acoustic show. Great music for sure! Some pics have been posted at the woww-pics site. Mine didn't turn out very well, so I'm waiting to get more from others.
FAN HELP IN PROMOTING WADE
GUIDELINES FOR USE OF HIS MATERIAL - pic, name, logo, signature

"A Place to Turn Around" - SOLD OUT
If you don't have this in your collection, you missed a real gem. ThatNashvilleSound.com listed it as one of its top 10 albums of 2009 - "the most underrated album of the year."
You can order MP3 downloads from iTunes and Amazon.com.
You can order an MP3 disc of the entire album from Amazon.com
Links to either or on this page:
http://www.wadehayes-woww.com/Music/placetoturnaroun.html
In their review - "With apologies to Yogi Berra, it’s time to rediscover Wade Hayes for the first time. Place To Turn Around is everything that is great about indie records. Imagine hanging around your favorite honkytonk bar and hearing an artist singing great neo-traditional country music with acoustic guitars, fiddle and steel and buying an album at the side of the stage following the performance. And then imagine that the artist you were listening wasn’t some unknown band, but a road-tested Nashville songwriter and musician with many hits under his belt. That is the experience of listening to Wade Hayes brand new album" ..  Read More
Video for Is It Already Time? has been posted
You may view it at this site.
Video for Is it Already Time?
Get the word out - use your facebook page, your twitter account, your e-mail to ask your friends to view this video. It's hard to imagine that there's anyone left in these United States who hasn't had a friend or a family member who's faced this situation. You can tell them, too, that from the beginning Wade's odds of making it were poor. Now he stands on the side of good health and is rebuilding his life and his career. Praise God!
The Links page is your source for finding pics, videos, reviews on other sites.
WadeHayes-WOWW.com Links Page
WEB SITES
Official Site
WOWW! Site -Official Fans Site
WOWW!-Pics Site
My Space
Facebook Fan Page
Facebook Friend's Page
For early Wade Hayes archives visit Cheryl Hill's site. We appreciate the time and expertise that Cheryl has contributed over the years to feature Wade.
Wade on the 2steppin site
BOOKING INFORMATION
Refer talent buyers to Wade's management
Mike Robertson Management
Phone: 615-329-4199
Fax: 615-329-3923
E-mail: assistant@mrmmusic.com
If you want to see Wade in your local area, ask your favorite venues to seek booking information.
Supplemental Booking - especially Texas
Mike McCary
mike@markchesnutt.com
If your venue is interested in booking Wade, an offer can be submitted at this site:
www.mccaryentertainment.com/wadehayes
ABOUT WOWW!
Welcome Colleen from England!
WOWW!, an e-mail newsletter to Wade Hayes fans, began in December, 1997. Subscribers reside in FIFTY (50) states as well as -
Australia, Brazil, Canada, England, Germany, Iraq, Ireland, Italy, Japan, Netherlands, Scotland, South Korea, Spain, Switzerland, New Zealand, Hong Kong.
WOWW! E-mail
Mailing Address:
WOWW! News / Helen Neal
P O Box 148274
Nashville, TN 37214
Messages for Wade can be sent to the same address. Mark ATTN: Wade Hayes
Wade has requested, "No presents, please."
Wade Hayes Appearance Details
http://www.wadehayes-woww.com/wadehayestour.html
Check with venues before travelling.