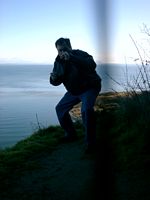 The sooner the American people grasp the sad fact that the Republican and Democrat parties are equally corrupt and that a massive effort is underway to create schizms between all of us along party lines while the ruling elite manipulators of BOTH parties chortle with glee as they seemlessly advance their agenda to dismantle America and to force us into a North American Union Dictatorship modelled after the EU, the better off for all of us.

Due to my last couple of alerts,https://www.ymlp.com/pubarchive.php?jham in which I addressed the serious and thorny problem of lawsuits pending in the Supreme Court which raise very valid questions about whether or not Obama meets the legal criteria of being "natural born" as required by the Constitution to run for President, I received several exceptionally angry emails from those who clearly regard this man to be "the messiah".

One person threatened to kill me (I furnished him with directions to my house and told him to bring a body bag for his corpse to be put into), while several others raged that I "must be" a "McCain supporter" (I'm not, never have been, and all anyone has to do to prove that to their satisfaction is read the IAHF archives.https://www.ymlp.com/pubarchive.php?jham ) Some equally misguided people raged that I "must be" a "racist" for opposing Obama. (Thats rich considering that I'm of mixed race myself and have opposed racism all my life with every fiber of my being.)

When I patiently attempted to discuss this with the irate Obama supporters who just unsubbed from the IAHF list making these angry comments, and attempted to calmly and dispassionately cite my specific constitutional concerns and explained in depth how they tie directly in with our battle to preserve our access to dietary supplements, not one of these people was able to respond. This shows us the extent of the ruling elite created GULF between people in this country- a GULF that they intentionally strive to deepen in the hopes that eventually it will lead to civil war between Globalists and Constitutionalists that will give them the excuse to unleash the 20,000 US Army troops the Pentagon just assigned to round us up with (all in the name of "protecting us from terrorists" of course: http://www.washingtonpost.com/wp-dyn/content/article/2008/11/30/AR2008113002217_pf.html

I am hearby calling on all of you on the IAHF list, regardless of your political ideology, to assist me in getting rid of this gulf so we can all work together against the ruling elite string pullers who are attempting to jerk all of our chains from behind the curtain.

We must be Americans before all else and rally around our Constitution which is currently under an unprecedented level of attack by those who seek to dismantle our nation in order to force us into a North American Union Dictatorship via which the FDA intends to ban our access to healing nutrients via the Trilateral Cooperation Charter: http://www.thepetitionsite.com/5/congressional-oversight-needed-to-stop-fdas-trilateral-cooperation-charter

The Bilderberg group which is in a process of dismantling America in order to force us into a NAU control our Supreme Court just as much as they control Congress. Firstly, I predict they'll dismiss the Berg suit saying that he lacked standing to bring it having failed to exhaust his legal remedy in the lower courts.

The Donofrio case will be harder for them to ignore, however. They'll will address it, and I predict Obama will get off the hook in a narrowly split decision by corrupt Justices whose loyalty to a future global totalitarian state totally outweighs any loyalty they might have once had to our constitution. I predict they'll engage in some sort of artful dodge by which they'll ignore the fact that Obama's mother was 18 when he was born, and not 21 as she would have had to be in order to meet the criteria for her son to be considered "Natural Born" as the law was written in 1961 at the time of his birth. (The law required her to have been on US soil for a minimum of 10 years with 5 of those years coming after the age of 16.)

Here are the reasons why the Supreme court will (wrongly) toss out the Donofrio lawsuit:

1. If they ordered Obama to step down it would trigger massive civil unrest especially in the inner cities, and they elite don't want this because they're not yet ready themselves for martial law. They realize how heavily armed we still are and they'd first like to tighten their level of control considerably by doing the following things:

***Interestingly, Obama himself is the sponsor of a bill via which the Bilderbergs intend to achieve these totalitarian collectivist goals- and this is the main reason the Supreme Court will fail to uphold the Constitution (The Poverty Act-S.2433) (Very important you call your Senators to oppose this legislation!!!)

This communist bill would force the (bankrupt) US to pay 7% of our GNP to the UN, adding $65 Billion per year to what the US already sends overseas.  Jeffrey Sachs who runs the Millenium Project says the only way to raise this money would be via a UN imposed tax on carbon emitting fossil fuels.The legislation would also ratify several UN Treaties  including the International Criminal Court Treaty, the Kyoto Protocol (global warming treaty), the Convention of Biological Diversity, the Convention on the Elimination of All Forms of Discrimination Against Women and the Convention of the Rights of the Child.

Does IAHF oppose "rights for women and children"? Of course not!!! These "Treaties" are given names that make them politically challenging to oppose and all manner of freedom destroying language is contained within them. They're Trojan Horses shielded from criticism via Political Correctness. Well IAHF does not play those games, we call a spade, a spade- damn the torpedos, full speed ahead!!

The UN's Criminal Court Treaty would flush our Constitution down the toilet and make all US Citizens subject to punishment meted out by the UN Criminal Court, the same folks who are bringing us the Genocidal Codex dictates to ban our access to dietary supplements.

The Kyoto Treaty is a scam based on junk science. Global warming is a myth, in fact current data acquired over the past 12 months clearly indicates that we're entering a period of global COOLING http://www.dailytech.com/Temperature+Monitors+Report+Widescale+Global+Cooling/article10866.htm Respected climatologists attempting to cry out from the wilderness point out that there have been cyclical periods of global warming and cooling depending on solar activity, but the UN has a population control agenda, and will do anything to achieve that goal even if it includes mass brainwashing of the public to get us to accept their efforts to manipulate every last vestige of our lives and to strip us of the last shreads of liberty.

Obama is the UN's biggest friend and supporter, he is a total tool of the globalists and is no friend of health or of health freedom- all he is is a slick chameleon. He is the ultimate imposter, the ultimate destroyer of lives. The Supreme Court will turn their backs on the Constitution when they side step the Donofrio case by a narrow margin.

They must do this because the elite haven't yet disarmed us. They need Obama in there to do it. I predict that unless enough of us strive to expose all of this and to bridge the great divide between people who foolishly support the two major sold out parties, Obama's policies combined with the imploding economy will trigger off a civil war between the government and Constitutionalists on one side, and Obama supporting globalists who are all too willing to participate in the planned destruction of our country on the other.

I don't want that to happen, but its all too predictable that it WILL happen unless enough of us can somehow find ways to awaken the sleep walking sheeple who are being herded en masse, unsuspectingly, to a largely unseen cliff.

IAHF is not here trying to win any popularity contests, but we are here to tell you what we think is going on so that you can successfully defend your access to dietary supplements, and you can't do that if our country is forced into a North American Union Dictatorship because its via that mechanism that FDA is striving to usher in Codex dictates. They're ushering in Codex via FDA's Trialteral Cooperation Charter with Canada/ Mexico, and IAHF needs your help to increase an awareness of this so we can get congressional oversight to stop it. http://www.nocodexgenocide.com/page/page/3113337.htm

If we can't get congressional oversight, more of us need to learn to grow herbs and organic vegetables and more of us need to find new ways to organize against the elements of coersion. One way might be to assist Russell Means in his ongoing efforts to establish his own nation within the borders of the US. The man has balls. He just created his own bank that only deals in gold and silver. This is the world's first non fractional reserve bank, and we can deposit our dollars to it to convert it to their currency: the Lakota. Means, a Libertarian, would undoubtedly welcome any entrepreneur who wanted to establish a dietary supplement or herbal manufacturing company on Lakota land where the FDA would have no jurisdiction. Its something we must explore as the US continues to implode and be dismantled by the banksters who Means is doing such a good job of opposing: http://www.republicoflakotah.com/  and Free Lakota Bank http://freelakotabank.com/

If you appreciate IAHF's ongoing efforts to shine light into the darkness and to tell the truth no matter what- if you would like to help us continue pushing for congressional oversight on FDA's Trilateral Cooperation Charter in order to stop Codex by defending US  Sovereignty and to help us carry this message to exponentially more people, please do the following things:

1) Remove the unsub link at the bottom of this email and mass forward it, encouraging more people to go to www.iahf.com where they can sign up at no charge to receive our alerts, and

2) Make a generous donation to IAHF via paypal at http://www.iahf.com/index1.html or by sending a check or money order to IAHF 556 Boundary Bay Rd., Point Roberts WA 98281 USA

Thanks for you generous support! Together we can keep our country from being destroyed, and we can defend health freedom.