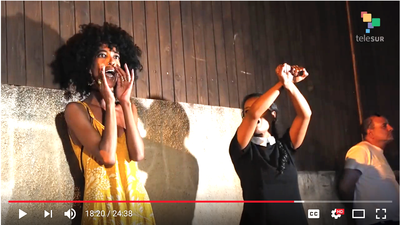 23 February 2018
Interviews available in English, Afrikaans, Setswana, Zulu (see below)
This year, as part of the 14th international #IsraeliApartheidWeek, the documentary "Anti-Black Racism Reveals Israel’s White Supremacy,” produced by award-winning journalist Abby Martin, will be screened at various events across South Africa. Click here to watch the documentary on YouTube.
The 25 minute documentary, which was first broadcast in 2017 by the Latin American TV channel, teleSur, features first hand interviews with Africans who have been subjected to Israeli racism and discrimination. Israel tries to suggest that it is multicultural and diverse, however, as this on the ground TV investigation shows, Israel oppresses not just the Palestinians, but also any Black person within its borders. From warehousing African asylum seekers in prison camps, to criminalizing and carrying out eugenics programs against its Ethiopian Jewish citizens, Israel’s treatment of Black people reveals that, according to the documentary, the Israeli project "is not just about Jewish supremacy, but also white supremacy".
If you would like to arrange a screening of this documentary for #IsraeliApartheidWeek in your city, town, university, work place, school or other area please be in touch with us at iawsouthafrica@apartheidweek.com so that we can send you a DVD copy of the documentary (the disc also contains bonus material including footage of an interview with Nelson Mandela on the topic of Palestine).
-------- * --------
#IsraeliApartheidWeek, endorsed in South Africa by over 100 organizations, is an international series of self-organized rallies, protests, lectures, cultural performances, concerts, sports events, films and workshops held annually in over 250 cities, communities and campuses across the globe. With "Afro-Palestinian solidarity" as this year's theme, #IsraeliApartheidWeek in SA will focus on both Israel’s apartheid policies against the Palestinians as well as the the regime's discriminatory policies against Africans.
Israel is expelling thousands of Africans, giving them an ultimatum: leave by 1 April or risk indefinite imprisonment. Israel has offered one hundred thousand rands in bonuses to civilians who aide in forcibly deporting African asylum seekers. Israel has portrayed non-Jewish Africans as a threat to Israel's Jewish character calling them “infiltrators” with Prime Minister Benjamin Netanyahu repeatedly calling for their expulsion saying that Africans "threaten the social fabric of society.” Israel’s Minister of Interior, Eli Yishai, has said that African immigrants “think the country doesn’t belong to us, the white man.” And the Israeli Minister of Culture and Sport, Miri Regev, has compared Africans to “a cancer”. In 2013 Israel was revealed to be forcibly sterilising African women without their consent.
In addition this year's #IsraeliApartheidWeek will also draw attention to the plight of the 17 year old Palestinian teenager Ahed Tamimi currently imprisoned by Israel for over two months now.
-------- * --------
For media interviews with the IAW South Africa Team, please contact:
Justin de Swardt, #IsraeliApartheidWeek National Spokesperson [Afrikaans, English +27 (0) 65 915 3803]
Alex Mdakane, #IsraeliApartheidWeek Deputy Spokesperson [Zulu, English, +27 (0) 78 526 8663]
Michia Moncho,  #IsraeliApartheidWeek National Convener [Setswana, English +27 (0) 78 295 4668]
Click here to find this press statement online.