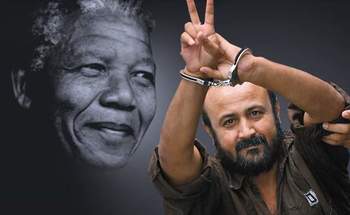 16 May 2017
South Africa's National Coalition 4 Palestine (NC4P) commends all formations and organizations as well as individuals that participated in this week's 24 hour fast. May our solidarity actions nourish the spirit of the #PalestinianPoliticalPrisoners and all oppressed peoples! As the NC4P we are fully behind the #PalestinianPoliticalPrisoners and their very reasonable demands including an end to Israel’s detention without trial.

The Chairperson of South African Parliament's Portfolio Committee on International Relations and Cooperation, Mr Siphosezwe Masango,  has applauded the recent 24 hour fast in solidarity with #PalestinianPoliticalPrisoners. In a statement published by the Parliament of South Africa, he said: “This action places our country at the centre of the global fight against injustices and human rights abuses…the mass hunger strike by Palestinian political prisoners and human-rights advocates remind us of our own struggle against the crime of apartheid” (click here for statement)
The hunger strike by the #PalestinianPoliticalPrisoners is backed by a number of South African government Ministers including our Deputy President - these are people that were once political prisoners themselves under Apartheid and several of them have said that the situation that Palestinians find themselves in Israeli jails and prisons is the same if not worse than what we faced in the 1980s during Apartheid.

South Africa's Minister of Trade & Industry Rob Davies, in concluding his 24 hour solidarity fast yesterday, said: "I have now nearly completed the symbolic hunger strike and will in an hours time eat and drink something for the first time in 24 hours...a very small gesture of solidarity with those brave freedom fighters of Palestine struggling for the very same rights many of us now take for granted in South Africa, but which were in fact won through the same spirit of selfless commitment".
The #PalestinianPoliticalPrisoners campaign is backed by a variety of organizations across the political spectrum. Some of the groups backing the campaign include the ANC, EFF, UDM, SACP and several human rights organizations including the South African Human Rights Commission, Lawyers for Human Rights and the SA Jews for a Free Palestine. If anything, our solidarity with the Palestinian people has brought South Africans of different races and religions together just as how during the 1980s the anti-apartheid movement brought our different people together in opposition to Apartheid.
On the other end of the spectrum, the Israel and its lobby are attempting to do exactly what Apartheid South Africa had done in the 1980s. In the same way that Apartheid South Africa termed our anti-apartheid activists as terrorists, likewise Israel and their local lobbies are referring to Palestinians as terrorists. But its hard to expect better from the Israel and its lobby, particularly the SAZF and SAJBD, because it is well known that the local Israeli lobby groups including the Israeli government were complicit with the Apartheid regime that killed our people.
Marwan Barghouti’s son, Aarab Barghouti (26), said to Israeli journalist Gideon Levy, in a recent article titled “Marwan Barghouti's Son: 'My Father Is a Terrorist Exactly Like Nelson Mandela” that:
“In prison, too, my father [Marwan Barghouti] seeks peace. Nothing will change that. Only Israeli propaganda presents him as a terrorist. Nelson Mandela was also portrayed as a terrorist. He spent 27 years in prison. And then he became a hero and was awarded the Nobel Peace Prize. My father is a terrorist exactly like Nelson Mandela. To the Israelis I want to say: If you admire Mandela, you should know that my father is repeating Mandela’s story. And if you do not esteem Mandela, I don’t care what you think. I am certain that one day the Israelis will reach the conclusion that the only solution is peace, and you will never have another partner like him. One day, the Israelis will see who Marwan Barghouti is.” (click here for article)
We urge the Israeli lobby to engage with the open letter by Jewish anti-apartheid icon Denis Goldberg who spent a brief period in Israel and who has concluded that Israel is an Apartheid State - he has also called on Israelis and Jews, as a Jewish person himself, to support Marwan Barghouti and #PalestinainPoliticalPrisoners (click here for statement by Denis Goldberg)
Click here to find more info on the Palestinian Political Prisoners (South African Campaign).