Pre-order the album on CD or vinyl: http://www.bengans.se/Artist.aspx?artist=Laakso
CLASH
"Crisp guitars line up against a sighing vocal, that swings between the emotions of the title - 'So Happy, So Sad' indeed." 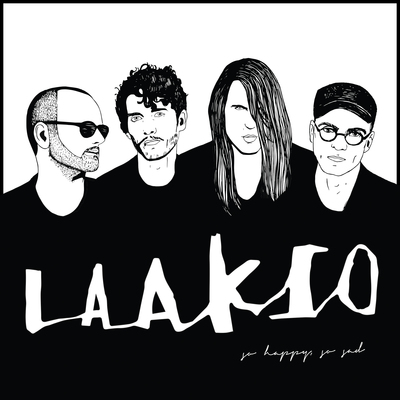 Mikael Fritz, Lars Skoglund, Markus Krunegård, David Nygård
Time is not linear, everything happens at the same time. At the same time that Adrian Recordings preparing the release of Laakso’s 5th album we are sitting in a dorm in Uppsala 2002 getting a demo from a guy called Markus Krunegård. The demo was then released as Laakso debut EP “Long Beach” on Adrian Recordings. Laakso then became one of Swedens’s fines indie bands with a long row of hits 2003-2007. Then Markus went solo and became one of Sweden’s biggest solo artists as well as member of constellations like Serenades together with Adam of Shout Out Louds. Numerous hits, tours and rewards later he find himself together with his band mates in Laakso again. Back where it all started on Adrian Recordings.

The new album is produced by Jari Haapalainen, that also produced most of the early material. It will be called “Grateful Dead” and is released the 22nd of April. First single from the album was the storming “Lack of Time”, second taster is the bittersweet “So Happy, So Sad”.
Adrian Recordings
Sweden
magnus@adrianrecordings.com
www.adrianrecordings.com