IAHF List  Please call your Congressmen and Senators TODAY via 1-877-SOB-USOB to oppose the US Mexico Canada Agreement Implementation Act HR 5430. This legislation creates the framework for a North American Union intended to destroy the USA. It contains within it two thirds of the Trans Pacific Partnership legislation that Trump opposed during the election. It also contains within it tthe Sanitary Phytosanitary Measures (SPS) language that harmonizes us to Canada, Mexico and Europe as well as to Codex which would destroy our access to dietary supplements!
More details below:
Oppose the USMCA
Implementation Act, H.R. 5430

The bill (and bill number) is in! The United States-Mexico-Canada-Agreement Implementation Act (H.R. 5430) was formally introduced in the House of Representatives, on December 13, 2019, by House Majority Leader Steny Hoyer (D-Md.) and House Minority Leader Kevin McCarthy (R-Calif.). H.R. 5430 is a 239-page bill to both approve and implement the now-2,410-page USMCA integration scheme. With a vote in the House scheduled for Thursday, December 19 2019, please contact your U.S. Representative and Senators and urge them to vote against H.R. 5430.

Phone calls and tweets (via Twitter) are the most effective ways to reach your congressman or woman. Below are just five reasons to oppose the USMCA Implementation Act. Feel free to use these reasons when addressing your Representative and Senators, or their staffs, in order to explain to them why to oppose the USMCA and thus vote against the implementation bill H.R. 5430.

Reason 1. Above U.S. and State Law 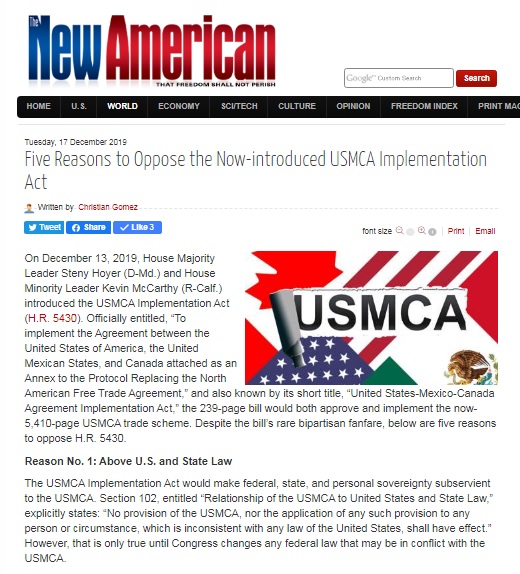 The USMCA Implementation Act would make federal, state, and personal sovereignty subservient to the USMCA. Section 102 of the implementing legislation states: “No provision of the USMCA, nor the application of any such provision to any person or circumstance, which is inconsistent with any law of the United States, shall have effect.”

However, the whole purpose of H.R. 5430 is in fact to change U.S. law in order to be in compliance with the USMCA, once the bill is enacted into law. Section 102 of H.R. 5430 states, “Nothing in this Act shall be construed […] to amend or modify any law of the United States, or […] to limit any authority conferred under any law of the United States, unless specifically provided for in this Act.” (Emphasis added.)

Regarding State law, Section 102 goes on to state, “No State law, or the application thereof, may be declared invalid as to any person or circumstance on the ground that the provision or application is inconsistent with the USMCA, except in an action brought by the United States for the purpose of declaring such law or application invalid.” (Emphasis added.)

Reason 2. Supranational Bureaucracy
H.R. 5430 does nothing to protect American sovereignty from the creation of an unaccountable regional bureaucracy that will operate above the jurisdiction of the federal government. Chapter 30 of the USMCA establishes a Free Trade Commission that will supervise 19 committees, working groups, and other bodies created under the USMCA. It will also have to power to create new committees or to merge and dissolve existing committees. The Commission will also be empowered to issue binding interpretations for tribunals and bi-national panels, and it can propose changes to the agreement itself, thus making the USMCA a “living agreement,” and therefore making it a nascent North American Union. 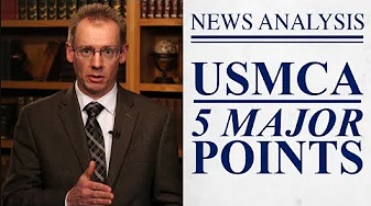 The implementation bill does nothing to protect American sovereignty from language in the USMCA that binds the U.S. to observing the United Nations Convention on the Law of the Sea (UNCLOS). UNCLOS is mentioned in the USMCA, in both Chapter 1 and Chapter 24, under “Sustainable Fisheries Management.”

The $1.5 billion will be used for the North American Development Bank to carry out and fund the enforcement of the USMCA’s environmental provisions through various federal agencies, including but not limited to the U.S. Department of Agriculture, Department of Commerce, Department of Interior, Department of Labor, the Environmental Protection Agency, the U.S. Fish & Wildlife Service, and the National Oceanic and Atmospheric Administration.

Reason 5. Open Immigration
H.R. 5430 also does nothing to undo language in the USMCA that would create a back door to open immigration. For example, Chapter 15 of the USMCA, entitled “Cross-Border Trade in Services,” states in part that the U.S., Mexico, or Canada cannot impose a limitation on the total number of “natural persons” that may be employed in a particular service sector. This opens the door for the socialist governments of Canada and Mexico, as well as for U.S., Mexican, or Canadian-based companies, to sue the U.S. federal government over any restriction on the number of employees that such a company may want to bring across the border into the United States. 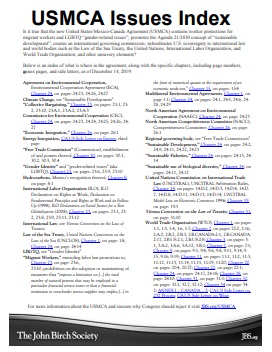 Furthermore, Article 23.8, under the section labeled “Migrant Workers,” in Chapter 23 of the USMCA, requires all three countries to “ensure that migrant workers are protected under its labor laws, whether they are nationals or non-nationals” of the country they are residing in. The term “non-nationals” could easily be applied to both undocumented aliens, or “Dreamers” from Mexico, and to illegal migrants from non-USMCA countries, such as Guatemala, Honduras, El Salvador, India, or China.

In addition to these tools, we have also updated our “USMCA Issues Index” to reflect recent changes made to the text of the agreement, as of December 14, 2019. The “USMCA Issues Index” is an alphabetical list of what are and where to find some of the most egregious aspects of the agreement that the Deep State-controlled mainstream media is not telling you about. We encourage you to use this index, not only as personal reference for what’s really in the USMCA, but to show or give to your Representative, Senators, and their respective staffs, in order to prove to them what’s really in the agreement and where in its 2,410-pages to find it for themselves. These tools are only as effective as you use them.

Phone your representative (202-225-3121) and your two senators (202-224-3121) and urge them to oppose the USMCA by voting NO on H.R. 5430, the USMCA Implementation Act. We also recommend contacting your congressmen's staffs in their local offices. Click here to look up their phone numbers, email addresses, Twitter addresses, etc.

Also, click HERE to send a condensed version of this message in the form of an editable, prewritten email to your Representative and Senators.