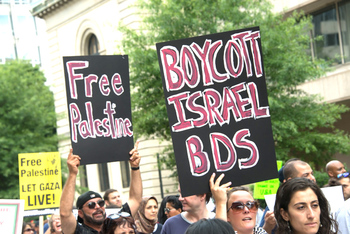 The South African human rights and Palestine solidarity organisation, BDS South Africa, a registered NGO and Public Benifet Organization (PBO), is among 20 international groups that have been added to a "blacklist" by the Israeli government's Ministry of Strategic Affairs, headed by Gilad Erdan.
According to Erdan, who's department is responsible for countering the international BDS movement, members of the blacklisted organizations will not be allowed to enter the country. Israel's Haaretz Newspaper quotes Erdan as saying: "We have shifted from defense to offense...[And] the boycott organizations need to know that the State of Israel will act against them…”. Israel's Interior Minister Arye Dery, whose ministry is responsible for implementing the list, has said that he will act against activists of the BDS movement "by every means.” (Click here) Last year Israeli Intelligence Minister Yisrael Katz called for the "civil targeted killing" of BDS leaders (Click here)
Among the 20 groups blacklisted by Israel is the 101 year old American Friends Service Committee (AFSC), a Quaker organization that was honoured with the 1947 Nobel Peace Prize for assisting and rescuing Jewish victims from the Nazi regime during World War 2. Kerri Kennedy, an AFSC official, responded to the AFSC’s inclusion on Israel’s BDS Blacklist by saying: “We answered the call for divestment from apartheid South Africa and we have done the same with the call for Boycott, Divestment, and Sanctions from Palestinians who have faced decades of human rights violations." (Click here)
Another organization included on Israel's BDS Blacklist is the US-based progressive Jewish organization, Jewish Voices For Peace (JVP). The irony of Israel and its lobby calling Israel "Jewish and democratic” cannot be lost. Click here for a moving article by JVP Executive Director titled "I'm a US Jew on Israel's BDS Blacklist. I Have Family in Israel. But I Won't Be Silenced". Other US organizations on Israel's BDS blacklist are the women-led anti-war group, CodePink and the US Campaign for Palestinian Rights.
Two prominent UK organizations have been added to Israel's BDS blacklist, the first is the UK charity and advocacy organisation War on Want, who’s director has commented: "This blacklist is a repressive tactic borrowed from the same playbook used by the apartheid regime in South Africa, when it tried to censor critics. Such attempts to silence human rights defenders through blacklisting and targeted harassment failed then as they will now.” (Click here). The other UK group blacklisted is the UK-based Palestine Solidarity campaign that includes, among its patrons, the UK Labour Party Leader, Jeremy Corbyn. (Click here)
In being blacklisted by Israel, we international activists are facing are only a shadow of what Palestinians endure on a daily basis. For example, to date Israel has denied entry (in violation of international law) to the over 700 000 indigenous Palestinian refugees who were in 1947 evicted, forcibly removed and prevented from returning to their homes (click here).

BDS South Africa echoes the sentiment of our partner organizations, that have also been added to the Israeli "blacklist", who have termed this latest move by Israel as a sign of the regime's increasing desperation and a reflection of the success of the BDS movement. If anything, with this blacklist and barring of people, Israel - like Apartheid South Africa - is isolating and BDS'ing itself!
ISSUED BY KWARA KEKANA ON BEHALF OF BDS SOUTH AFRICA
BOYCOTT, DIVESTMENT AND SANCTIONS AGAINST ISRAEL IN SOUTH AFRICA (BDS SOUTH AFRICA)
5th Floor | Mishumo House | 77 De Korte Street | Braamfontein | Johannesburg
PO Box 2318 | Houghton | 2041 | Johannesburg
T: +27 (0) 11 403 2097 | M: +27 (0) 74 054 3826 | F: +27 (0) 86 650 4836
W: www.bdssouthafrica.com | E: kkekana@bdssouthafrica.com
www.facebook.com/bdssouthafrica | www.twitter.com/bdssouthafrica | www.instagram.com/bdssouthafrica
BDS South Africa is a registered Non-Profit Organization. NPO NUMBER: 084 306 NPO
BDS South Africa is a registered Public Benefit Organisation with Section 18A status. PBO NUMBER: 930 037 446