PRESS STATEMENT
On the passing of a leader, Comrade Mawlana Ihsaan Hendricks 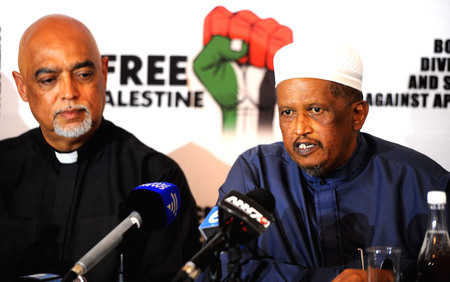 The human rights and Palestine solidarity organisation, BDS South Africa, joins fellow South Africans and, in particular, the South African Muslim community, in mourning the departure of Mawlana Shaykh Ihsaan Hendricks al-Nadwi.
Hendricks, a giant in the international Islamic scholarly community, was a friend to the Palestinian people, an activist in the Palestine solidarity movement and a supporter of the BDS boycott of Israel campaign.
Mawlana Hendricks, originally from Worcester in the Western Cape, studied at Nadwatul Ulama Seminary in Lucknow, India and played a major role in Muslim community matters in South Africa as President of the Muslim Judicial Council (MJC). Internationally, he was a leading member of the International Muslim Scholars Council.  He was the founder of the Al Quds Foundation in South Africa which focussed on both moral and material support for the Palestinian struggle. He also played a leadership role in the National Coalition 4 Palestine (NC4P) and was an active promoter of the BDS campaign.
Hendricks was crucial in getting South African Muslims to see that while they should be inspired by their religious values (of justice and equality) to fight for the liberation of Palestine that that struggle and providing solidarity was not one essentially about Muslims but one of justice for all Palestinians regardless of faith (or none). He was an ally of Muslims, Christians and Jews; whoever was oppressed! He was a supporter of justice across the board!
He was equally comfortable in our local communities and townships as well as in international fora where he was highly regarded as a world class orator and scholar.
Hendricks understood and underscored the value of progressive internationalism that required religious people to act in solidarity with all oppressed peoples of the world. Mawlana Hendricks understood, more than most, that his faith demanded a dis-ease with oppression. He did not flinch to speak truth to power.  Supporters of Israel, the Israeli lobby (including the SA Jewish Board of Deputies) opposed him but our ruling party, our government and civil society embraced him.
His departure from this world is an immense loss to all of us and we offer our sincere condolences to his family. Inspired by his life and staying true to his commitment, we will continue our humble contribution, from the Southern tip of the African continent, to the Palestine solidarity movement and will, with our Palestinian comrades and their progressive Jewish Israeli allies, see a Free Palestine. On that day we will celebrate the end of Israeli Apartheid, in his name and the many others who gave their lives, both, in Palestine and in the international solidarity movement, for this cause.
Hamba Kahle Comrade Mawlana Ihsaan Hendricks!
ISSUED BY PROFESSOR FARID ESACK ON BEHALF OF BDS SOUTH AFRICA
For comment, kindly contact Professor Farid Esack (Chairperson of the Board of BDS SA): +27 (0) 834599989
BOYCOTT, DIVESTMENT AND SANCTIONS AGAINST ISRAEL IN SOUTH AFRICA (BDS SOUTH AFRICA)
5th Floor | Mishumo House | 77 De Korte Street | Braamfontein | Johannesburg
PO Box 2318 | Houghton | 2041 | Johannesburg
T: +27 (0) 11 403 2097 | F: +27 (0) 86 650 4836
W: www.bdssouthafrica.com | E: kkekana@bdssouthafrica.com
www.facebook.com/bdssouthafrica | www.twitter.com/bdssouthafrica | www.instagram.com/bdssouthafrica
BDS South Africa is a registered Non-Profit Organization. NPO NUMBER: 084 306 NPO
BDS South Africa is a registered Public Benefit Organisation with Section 18A status. PBO NUMBER: 930 037 446