December 23,  2011
IN THIS WOWW!
Wade Battles Cancer
Shocked and saddened has been the reaction of those who've learned of Wade's health battle. He underwent a lengthy complex surgery to remove cancerous tumors from his colon and his liver. The surgeon stated that he was able to do more than he expected, and that he got everything he was going for. Wade will undergo 6 months of chemo once he has healed.
Cards may be sent (please, no gifts, Wade is adamant about that)
Wade Hayes
c/o WOWW! News
P O Box 148274
Nashville, TN 37214
I've set up a new e-mail account for those who might wish to e-mail their support:
BestWishes-to-WadeHayes@comcast.net
I'll print those for him.
WOWW! Subscriber Extra
The book "A Country Music Christmas," by Cathie Pelletier, Patsi Bale Cox and Jim Glaser was published in 1996. The book, now out of print, had comments about Christmas made by country music artists, who also contributed a recipe. I can vouch for the broccoli casserole Wade's mom makes. As a new artist, it was an eventful year for Wade. He tells what that Christmas meant to him. This year he won't be traveling to Oklahoma. His parents are here with him.
Link to WOWW! Subscriber Extra
Dosey Doe's - The Windlands (Houston, Texas)
Dosey Doe’s is a charming, fun venue. Built from an old barn, it has warmth and character. It’s an excellent site for an acoustic show, and there’s no better artist doing an acoustic show than Wade. He started off with his acoustic “warm-up” song, “Don’t Make Me Come to Tulsa.”  He had several of his hits on the playlist. Remarking on “I’m Still Dancin’ With You,” he teased the crowd that he recorded it when he was 12. “They just think Justin Bieber was something new.”
He introduced 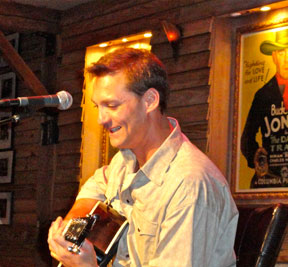 us to a couple of new songs. The first one, “I’m a Wrecking Ball,” spoke of breaking down the barriers that have been built against love. The second one began with a warm baritone “Good Morning, Baby!” For me he could have just repeated that phrase several times. I think the likely title will be, “I Can’t Get Close Enough to You.” He performed some of those great Gary Stewart songs that he does so well: “An Empty Glass,” “I See the Want to in Your Eyes,” “Flat Natural Born Good-Timin’ Man,”  (I keep plugging for him to do a tribute album to Gary.)
We heard several songs from the latest album, “Place to Turn Around.” Tongue in cheek again, he told the group that he’d written “God Made Me to Love You” for his dog, Jack. The audience couldn’t help being tickled over some of those lines as would relate to a dog - especially “when I look into your eyes.” Wade tried to protest that it was a serious song, but eventually everyone was laughing. He did the crowd pleaser, the as yet unreleased, “I’m Gettin’ Too Old for This.” Wade at Dosey Doe’s - you got to be there!

PLACE TO TURN AROUND, WADE'S NEWEST ALBUM
To Order
http://www.wadehayes-woww.com/Music/placetoturnaroun.html
Let's see if we can get some download action for Wade and his great album, Place to Turn Around - and give him a boost at Amazon and iTunes. I'll designate a download track in each WOWW! for anyone willing to spend an extra 99 cents to promote his career - concentrating on one track will help us create more of a stir. A click on the above link will give you access to all his albums, and 3 singles that were released, at both iTunes and Amazon.
Album: Place to Turn Around
This WOWW!'s selected track: Place to Turn Around - October selection
Two cuts from the McHayes Album have been added to iTunes and Amazon.com
Wade and Mark McClurg teamed together for a short time as the duo McHayes. Their album, Lessons in Lonely,  was not released to the public. (A shame, really, there was some great music on it.) iTunes and Amazon.com have added two cuts from that project. It Doesn't Mean I Don't Love You, written by Trent Willmon, has Wade singing the lead and Mark doing the high harmony. The Wrong Kind of Right has Mark singing the lead and Wade doing the harmony.
ON THE NET
We've added a link to a new review of the album, Place to Turn Around. This one, written by Cheryl Hill, is featured on the Country Music-America web site.
The Links page is your source for finding pics, videos, reviews on other sites.
WadeHayes-WOWW.com Links Page
WEB SITES
Official Site
WOWW! Site
WOWW!-Pics Site
My Space
Facebook Fan Page
Facebook Friend's Page
For early Wade Hayes archives visit Cheryl Hill's site. We appreciate the time and expertise that Cheryl has contributed over the years to feature Wade.
Wade on the 2steppin site
Fan has a tour jacket for sale
it is a LARGE blue denim jacket in absolutely MINT A+ uncirculated condition (never worn ever); Wade autographed it in black Sharpie above the left hand front pocket; it has an unbelievably large beautiful patch on the backside (has to be seen to be appreciated) - it says WADE HAYES  TOUR 1996  ON A GOOD NIGHT; it is made by Authentic Eagle Dry Goods Co and Made in the USA; I am not very handy with computer and digital camera , etc usage so I don't know how to send pictures , etc online but believe me anyone who is interested/buys it will in no way be disappointed or complain; I am looking for a minimum of $150 or highest bidder - it is a well-worth-it collector's item.  Bill Brady onjnicks@yahoo.com
BOOKING INFORMATION
Refer talent buyers to Wade's management
Mike Robertson Management
Phone: 615-329-4199
Fax: 615-329-3923
E-mail: assistant@mrmmusic.com
If you want to see Wade in your local area, ask your favorite venues to seek booking information.
Supplemental Booking - especially Texas
Mike McCary
mike@markchesnutt.com
If your venue is interested in booking Wade, an offer can be submitted at this site:
www.mccaryentertainment.com/wadehayes
ABOUT WOWW!
WOWW!, an e-mail newsletter to Wade Hayes fans, began in December, 1997. Subscribers reside in FIFTY (50) states as well as -
Australia, Brazil, Canada, Germany, Iraq, Ireland, Italy, Japan, Netherlands, Scotland, South Korea, Spain, Switzerland, New Zealand, Hong Kong.
WOWW! E-mail
Mailing Address:
WOWW! News / Helen Neal
P O Box 148274
Nashville, TN 37214
Messages for Wade can be sent to the same address. Mark ATTN: Wade Hayes
Wade has requested, "No presents, please."
Wade Hayes Appearance Details
Wade has suspended travel and appearances while he's treated for cancer.