The South African Jews for a Free Palestine (SAJFP*) welcomes the decision by our Minister of Sport and Recreation, Thulas Nxesi, to boycott the upcoming Davis Cup tennis match between South Africa and Israel. The minister’s stance is a welcome move – a sports boycott of Israel is a necessary means to show Israelis that the Occupation and general denial of human rights to Palestinians will not be accepted. In this vein, we hope that his action will also be a signal to the South African government to engage with all our sporting codes so as to implement a general refusal to play Israeli teams until a just peace settlement is reached.
In this regard, we also welcome the Minister's mention of the growing number of Jews across the globe who support BDS and refuse to allow Israel to continue with its oppressive policies in the name of Jews and Judaism. To criticise and boycott the State of Israel, in its current form as an Apartheid society, is not an attack on Jews or Judaism anymore than criticising and boycotting Apartheid South Africa was specifically an attack on Afrikaners or Christians.
We will be participating in protest action together with the Palestine Solidarity Alliance and other organizations at a picket outside the Davis Cup tennis match where Israel will be playing on Friday 2nd February at 2pm at the Irene Country Club in Pretoria and invite fellow members of the Jewish community and beyond to join us in taking a stand against the view that ‘normal sport’ is possible or desirable with  an abnormal regime.
For more information please contact:
Allan Horwitz:  082-512-8188
*South African Jews for a Free Palestine (SAJFP) is an organisation of Jewish South African who wish to see a just resolution to the conflict in Historic Palestine. We strongly believe in the Jewish concept of Tikkun Olam, “Repairing the World”, which embodies social action and the pursuit of justice. Historically Jews have been involved in struggles to achieve social justice and we are determined to continue this tradition and to speak out against injustice carried out in our name. 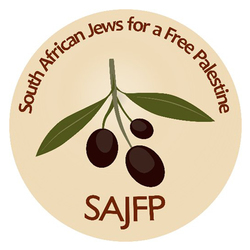