March 21, 2013
IN THIS WOWW!
June 7, Fri - Wade Hayes Friends Fest - 8 am  -
Register NOW for the Friends Fest Breakfast! This sells out fast!
This year's event will be limited to WOWW! Subscribers.  I'm giving you a heads-up.  If you've usually brought a guest that was not a WOWW! subscriber, s(he) should subscribe quickly if they want a chance to attend this year's event.I expect to sell out in 72 hours
This is the fan event of the year. Included is a full breakfast, a Wade performance, door prizes and a meet and greet session.
Click Here to register.

Wade on the Airwaves - Television
March 22 - RFD-TV The Joey & Rory Show.
The Joey+Rory Show airs weekly on RFD-TV during the following times
*Fridays at 9 pm ET
*Saturdays at 7 am ET
*Sunday at 9:30 pm ET
*Monday at 2 pm ET
*Monday at Midnight ET
I hope this views in your area. In Nashville, the show airs on Comcast, Channel 136.
Wade on the Airwaves - Radio
April 4, Guest Artist Thursday
WSM-AM 650
2 - 3 pm CDT
Wade again will be on the Guest Artist show to play some favorite tunes and offer insights into their origins. If you're not in listening range of the station, listen to it on your web browser.
Video for Is It Already Time? has been posted
You may view it at this site.
Video for Is it Already Time?
Get the word out - use your facebook page, your twitter account, your e-mail to ask your friends to view this video. It's hard to imagine that there's anyone left in these United States who hasn't had a friend or a family member who's faced this situation. You can tell them, too, that from the beginning Wade's odds of making it were poor. Now he stands on the side of good health and is rebuilding his life and his career. Praise God!
Notes on  the Bluebird Cafe Writer's night 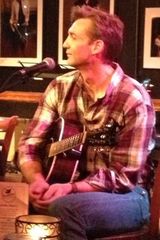 On a cold damp Tuesday evening, The Bluebird Cafe was warm and inviting. Four talented song writers performed acoustically in Nashville's premier listening room to a sold-out house. I hadn't heard of Scott Sean White, Helene Cronin or Terri Jo Box, but I have the feeling I will hear more of them - very talented.
Wade's Playlist: Good Day to Go Crazy, The Devil Song, God Made Me (to Love You) - Love Knew Better (a catchy new tune), What's a Broken Heart For You,
Is It Already Time?

Notes on  the Station Inn Session on WSM-650 AM 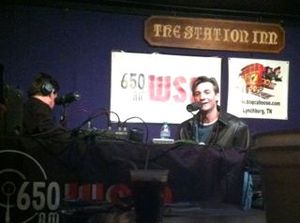 Mike Terry the host of the Drive Time show talked with Wade on the 5 - 6 pm session. The conversation included Wade'sbattle with cancer and his rescue of his dog, Jack. From 6 -7 Wade brought two premier musicians with him - Aaron Till on the fiddle and Dink Cook on the bass. This show was streamed alive online around the world.  I hope you got the chance to hear it. Wade did one "cover" song, Bob Wills' "Right or Wrong." The rest were his recorded material.
Wade's Playlist: Good Day to Go Crazy; Don't Make Me Come to Tulsa; Don't Stop; The Day that She Left Tulsa; What's a Broken Heart For You; Old Enough to Know Better; I'm Still Dancin' with you; On a Good Night; What I Meant to Say; Right or Wrong; Is It Already Time?
Social Media - Wade's Facebook Fan Page, Friend's Page and Twitter link
Wade's Facebook Fan Page
Wade's Facebook Friend's Page
Wade's Twitter Account

PLACE TO TURN AROUND, WADE'S NEWEST ALBUM
SOLD OUT - WADE DOES NOT PLAN TO HAVE ANY MORE PRINTED AT THIS TIME
If you don't have this in your collection, you missed a real gem. ThatNashvilleSound.com listed it as one of its top 10 albums of 2009 - "the most underrated album of the year."
You can order MP3 downloads from iTunes and Amazon.com.
You can order an MP3 disc of the entire album from Amazon.com
Links to either or on this page:
http://www.wadehayes-woww.com/Music/placetoturnaroun.html
In their review - "With apologies to Yogi Berra, it’s time to rediscover Wade Hayes for the first time. Place To Turn Around is everything that is great about indie records. Imagine hanging around your favorite honkytonk bar and hearing an artist singing great neo-traditional country music with acoustic guitars, fiddle and steel and buying an album at the side of the stage following the performance. And then imagine that the artist you were listening wasn’t some unknown band, but a road-tested Nashville songwriter and musician with many hits under his belt. That is the experience of listening to Wade Hayes brand new album" ..  Read More
Two cuts from the McHayes Album have been added to iTunes and Amazon.com
Wade and Mark McClurg teamed together for a short time as the duo McHayes. Their album, Lessons in Lonely,  was not released to the public. (A shame, really, there was some great music on it.) iTunes and Amazon.com have added two cuts from that project. It Doesn't Mean I Don't Love You, written by Trent Willmon, has Wade singing the lead and Mark doing the high harmony. The Wrong Kind of Right has Mark singing the lead and Wade doing the harmony.
The Links page is your source for finding pics, videos, reviews on other sites.
WadeHayes-WOWW.com Links Page
WEB SITES
Official Site
WOWW! Site
WOWW!-Pics Site
My Space
Facebook Fan Page
Facebook Friend's Page
For early Wade Hayes archives visit Cheryl Hill's site. We appreciate the time and expertise that Cheryl has contributed over the years to feature Wade.
Wade on the 2steppin site
BOOKING INFORMATION
Refer talent buyers to Wade's management
Mike Robertson Management
Phone: 615-329-4199
Fax: 615-329-3923
E-mail: assistant@mrmmusic.com
If you want to see Wade in your local area, ask your favorite venues to seek booking information.
Supplemental Booking - especially Texas
Mike McCary
mike@markchesnutt.com
If your venue is interested in booking Wade, an offer can be submitted at this site:
www.mccaryentertainment.com/wadehayes
ABOUT WOWW!
WOWW!, an e-mail newsletter to Wade Hayes fans, began in December, 1997. Subscribers reside in FIFTY (50) states as well as -
Australia, Brazil, Canada, Germany, Iraq, Ireland, Italy, Japan, Netherlands, Scotland, South Korea, Spain, Switzerland, New Zealand, Hong Kong.
WOWW! E-mail
Mailing Address:
WOWW! News / Helen Neal
P O Box 148274
Nashville, TN 37214
Messages for Wade can be sent to the same address. Mark ATTN: Wade Hayes
Wade has requested, "No presents, please."
Wade Hayes Appearance Details
Thursday, April 4 - Nashville, TN
WSM-AM 650 Guest Artist

Details in the next WOWW!

You need to be a WOWW! subscriber to purchase a ticket.

Check with venues before travelling.