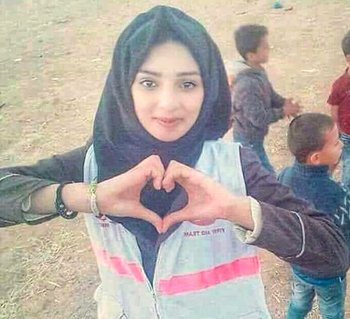 10 August 2018 | https://bit.ly/2vAkm9T
As part of women’s month (August), South African women have awarded (posthumously) the 21 year old Palestinian nurse, Razan Najjar, who was murdered earlier this year by Israel. An Israeli sniper shot Najjar even though she was wearing a clearly identifiable medical vest. (Click here for a CNN article)
Najjar was conferred the Bravery Award at the annual gala dinner of Women of Wonder (WOW). BDS South Africa received the award on behalf of the family of Razan and read out a letter by her parents, Ashraf and Shabreen Najjar. Below is a part of that letter:
“We as the Al Najjar family are humbled by the Women of Wonder Bravery award being granted posthumously to our dear daughter, Razan Al Najjar. Razan, a humanitarian at heart, was the personification of the gentleness yet fierceness of, both, Palestinian women and men.
We Palestinians fought, sacrificed and contributed to your struggle against Apartheid with no expectation of anything in return – we gave of ourselves because of the gross apartheid that you lived under and that we viewed as an abomination to any peace loving people. The killing of our angel, Razan, is a massive loss to us as a family. However, we Palestinians are not charity cases in need of handouts and that is why we respect the solidarity (not sympathy) that we receive from the streets of South Africa.
We are proud of your achievements and successes, for example, in terms of the BDS movement and its growth in South Africa. The South African government should be implementing sanctions against Israel starting with the implementation of the downgrade of the SA Embassy in Tel Aviv followed by more stringent actions as was carried out by other governments during the 1980s against Apartheid South Africa.
We are inspired by you and we hope to see stronger action and solidarity coming from the beloved land of Albertina Sisulu, Winnie Mandela, Sophie De Bruyn, Fatima Meer, Shamima Shaik, Zuliaka Mayet and the various other women who contributed and made unimaginable sacrifices for your liberation. Click here for the full letter from the parents of Razan Najjar.
This year alone, in the last 5 months, Israel has killed over 150 Palestinians (including 2 medics, 2 journalists and 50 children). Following Israel’s recent killings and its 14th of May massacre (where Israel killed over 50 Palestinian in one day), South Africa withdrew its Ambassador from Tel Aviv and SA’s governing party’s NEC urged the SA Minister of International Relations to implement the party’s resolution for the “unconditional” downgrade of the SA Embassy in Israel to a liaison office until Israel abides to international law. Minister Sisulu has, to date, not implemented the ruling party’s unambiguous resolution that was due to be enforced with “immediate” effect.
In celebrating Women’s Day and Women’s month, the human rights and Palestine solidarity organisation BDS South Africa, beyond our contribution to internationalism, commits itself to the struggle against patriarchy and the all pervasive violence against women. We recognise that the freedom of all oppressed people including the Palestinians, Saharawis and Cubans … must be accompanied by the liberation of women in particular. As Thomas Sankara put it: “Women hold up the other half of the sky.”
Wa thintha bafazi, wa thintha imbokodo! You strike a woman (in South Africa, Palestine or anywhere), you strike a rock!