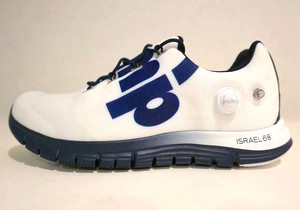 On Monday, Reebok Israel announced that a special edition sneaker in blue and white, engraved with “Israel 68” on the side of its heel, would be designed as a collector’s item for a onetime release on the occasion of what Israel calls  its “Independence Day.” What Israel calls its Independence Day, Palestinians refer to as their "Catastrophe" or the Nakba (the 1948 establishment of the Modern State of Israel [different to the Biblical Land of Israel] that saw the beginning of the displacement and oppression of the indigenous Palestinian people as well as start of the modern day conflict). The 1948 establishment of Israel in Palestine resulted in the destruction of various Palestinian towns and creation of today’s 7 million refugee population.

Following complaints and an outcry on social media by Palestinian and BDS activists as well as supporters who called for boycotts of the company’s products, Reebok released a statement distancing itself: “Reebok would like to distance itself from the shoe. The shoe was a one-off initiative from one of our partners. We do not support this initiative. Our partner has withdrawn its plans to auction off this shoe. Reebok believes in the unifying power of sport. Our main focus and priority is to inspire people everywhere to be their absolute best – physically, mentally and socially.” (Click here for more info).

Palestinians are welcoming the move with Abdulrahman Abunahel, the Gaza-based Coordinator of the Palestinian BDS Movement, saying: “Reebok has distanced itself from this terribly offensive initiative after recognizing the reputational and financial price a BDS campaign against it would have cost it as a result … international corporations should understand that people of conscience around the world will hold them accountable for similar offences".
ISSUED BY KWARA KEKANA ON BEHALF OF BDS SOUTH AFRICA.