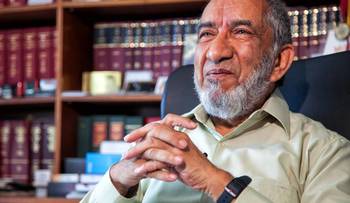 At the same time we also celebrate the life of Essa Moosa by recognising the incredible contribution he made to the South African struggle against Apartheid, our young democracy and to the global community more generally. Judge Moosa was a servant of the people and made concrete contributions to our country and our people, throughout his entire life.
As the countless obituries reiterate - Judge Moosa was fearless and instrumental in the struggle for our freedom, he was an exemplary judge of the highest integrity and he was also a relentless internationalist. During the struggle against Apartheid he was a lawyer to the community - the defender of high profile comrades as well grassroots activists. Ryland Fisher in a moving tribute wrote that: "Moosa and former Justice Minister Dullah Omar were known as 'the struggle lawyers'. Many comrades shared stories about how one of the first things they learnt in [the anti-Apartheid] struggle was Essa Moosa’s number, with an instruction to “phone Essa” whenever they were in trouble.”
Executive chairman of Independent Media and friend of Essa Moosa, Dr Iqbal Survé said of the judge: “During the eighties we knew who to turn to in times of struggle, we knew that if the security police was hunting us, if activists went missing, if people were being held in detention without trial, that our struggle lawyer Essa Moosa would be there. He did not only provide legal counsel, but also gave some of himself to many of us….We do not only salute him for the work he did during the dark days of apartheid, but also for helping usher in a new, just South Africa.”
Judge Moosa was indeed a champion of transformation in our judiciary and, in fact, in the late 1990s, was the first attorney (as opposed to an advocate) who was appointed as a judge in the Hight Court. Moosa was appointed by Nelson Mandela.
Finally, Judge Moosa was also committed to the struggles of people beyond our borders. He spent much of his time, during his retirement years, doing international solidarity work, he assisted in efforts to combat xenophobia, participated in the Russell Tribunal on Palestine to hold the Apartheid regime of Israel accountable but most close to his heart was the struggle of the Kurdish people.

Judge Essa Moosa served as chairperson of the Kurdish Human Rights Action Group (KHRAG) and also served as Chairperson of the International Peace and Reconciliation Initiative (IPRI) which was launched in 2012 in response to a joint call led by Archbishop Emeritus Desmond Tutu and supported by other leading international figures for the resumption of dialogue between the Turkish Government and the Kurdish leader Abdullah Ocalan for a lasting and peaceful settlement of the Kurdish question.
We dip our flags and salute the comrade Judge and struggle lawyer, Essa Moosa, for the wonderful human being he was but also for his enormous commitment to human rights, a better South Africa and better world.
ISSUED BY KWARA KEKANA ON BEHALF OF BDS SOUTH AFRICA