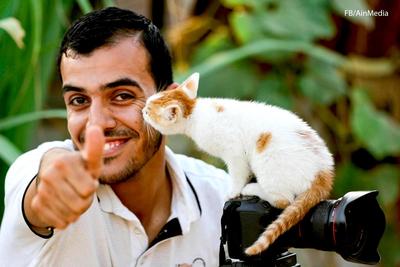 Yesterday, Friday 6th April, Israeli snipers shot and killed 30 year old Palestinian photo journalist Yaser Murtaja (click here for news article).
Murtaja was hit despite wearing a blue flak jacket marked with the word "press", discerning him as a journalist (click here for photo, warning graphic content).
Murtaja was born in the Palestinian Gaza Strip, often described as a prison camp (where Israel controls what and who is allowed in and what and who is allowed out). It’s the worlds most densely populated piece of land (25km by 6km with over 2 million people).
Last month Yaser posted a picture of Gaza taken by a drone and said that he hoped to one day take such a photo from the sky instead of from the ground (click here). Israel unfortunately also controls the airspace above Gaza. Murtaja never got the opportunity to take the photo or to, even once, leave Gaza.

Palestinian media analyst Nour Odeh has described Murtaja as "a beautiful soul and a gifted journalist [who] dedicated his short-lived career to telling his people's story, showing their pain but also their joy, & dreams. His friends and colleagues mourn him with sorrow". Our condolences go out from South Africa to the friends, family and media colleagues of Yaser Murtaja. Hamba kahle, Yaser.
----------*----------
In addition to Murtaja, Israeli snipers also shot 6 other journalists and killed two Palestinian teenagers Mohammed Madi and Alaa Azamli. In total Israel killed 9 un-armed Palestinians yesterday (6 April) and 30 since last week Friday (30 March). Palestinians across the political and religious spectrum have been gathering at weekly protests, dubbed the #GreatReturnMarch, which is a 6 week series of demonstrations taking place along the border of Gaza and Israel. Over 75% of the Palestinian people living in Gaza are refugees whose homes are in Israel. The UN has demanded that Israel allow the Palestinians refugees to return but Israel has refused.
ISSUED BY KWARA KEKANA ON BEHALF OF BDS SOUTH AFRICA
BOYCOTT, DIVESTMENT AND SANCTIONS AGAINST ISRAEL IN SOUTH AFRICA (BDS SOUTH AFRICA)
5th Floor | Mishumo House | 77 De Korte Street | Braamfontein | Johannesburg
PO Box 2318 | Houghton | 2041 | Johannesburg
T: +27 (0) 11 403 2097 | +27 (0) 74 054 3826 | F: +27 (0) 86 650 4836
W: www.bdssouthafrica.com | E: kkekana@bdssouthafrica.com
www.facebook.com/bdssouthafrica | www.twitter.com/bdssouthafrica | www.instagram.com/bdssouthafrica
BDS South Africa is a registered Non-Profit Organization. NPO NUMBER: 084 306 NPO
BDS South Africa is a registered Public Benefit Organisation with Section 18A status. PBO NUMBER: 930 037 446