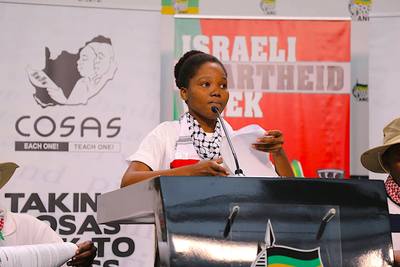 The Palestine solidarity and human rights organisation BDS South Africa has learnt, with great sadness, of the passing of the former President of the Congress of the South African Students (COSAS), comrade Sandra Baloyi. Baloyi, who died at the all too young age of 20 years, was the first female to be elected as President of the school learner organisation, COSAS (which operates in schools across the country).

President Sandra was a close friend of the boycott, divestments and sanctions (BDS) against Israel movement and she was also a Palestine solidarity activist in her own right. Baloyi and her COSAS collective took bold, creative and uncompromising positions in support of the Palestinian struggle with a primary focus on the plight of Palestinian children living under Israeli Apartheid. Click here for a video of Baloyi speaking at an Israeli Apartheid Week press conference.

The popular COSAS-led "Learn Without Fear" campaign in South African schools has included a special focus on the plight of school children throughout the world and in particular those in Palestine. Baloyi and the leadership of COSAS has insisted that Palestinian school children should also be able to learn in an environment free from the prejudice, sexism, harassment and racism dispensed on a daily basis by the Israeli regime. As a result of constant work the fact that Palestinian children leave their homes going to school unsure of their return because of Israel's arbitrary arrests, shootings, abuse and beatings has found awareness and expression in the various programs of COSAS. BDS SA will continue working with COSAS in expanding, among schools, solidarity campaigns with the people of Palestine as well as advacning the BDS bocyott of Israel.

President Sandra died a change agent, an internationalist, a gender activist, an ardent fighter of the rights of students and the first woman President of one of the largest student organisations on the African continent.

Our thoughts are with her family, friends and comrades.

BDS SA members will be joining the memorial service tomorrow at Kgwekgwe Seconday and the funeral on Sunday at Moleketla Village in Bolobedu (Tzaneen).